A CRI DE COEUR IN A POOL OF MILK: DECODING ‘SALOME’ IN SALZBURG 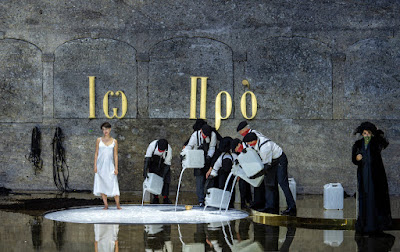 SALZBURG, Austria — So much almost happens in Romeo Castellucci’s new production of Strauss’s “Salome,” playing at the Salzburg Festival through Aug. 27 and streaming online at medici.tv through Oct. 28.

In this staging, it’s as if desire were a dissonant chord torturously on the verge of resolution. King Herod wants a dance from Salome that never happens; Salome wants the head of Jochanaan, but it never comes; viewers want to make sense of Mr. Castellucci’s images, but they likely never will.

In place of the classic scenes audiences might expect, Mr. Castellucci delivers a stream of enigmas. During Salome’s Dance of the Seven Veils, the entire cast leaves the stage except for her. She lies on Herod’s throne — a brass cube with the letters “saxa” (Latin for “stones”) carved in it — in a fetal position, until a stone cube descends from above and seems to swallow her.

In the final monologue, Salome — sung with shocking ferocity by the Lithuanian soprano Asmik Gregorian — delivers her cri de coeur while standing in a shallow pool of milk. With her are two objects: the head of a horse, which earlier had served as an avatar for Jochanaan, and the headless corpse of Jochanaan, sitting upright in a chair.

Artistic choices like this are almost expected of Mr. Castellucci, whose riddle-ridden theater has left audiences baffled and awed for decades. (He makes a rare appearance in the United States next May with “Democracy in America.”)
But for all of the mystery surrounding Mr. Castellucci’s work, he speaks about it with remarkable clarity. During an interview this week, he was happy to answer questions about details and symbolic motifs that had some people scratching their heads long after the curtain calls.

Mr. Castellucci even indulged me when I asked him to break down the scene with Salome in a pool of milk, which is poured into the pit that previously held Jochanaan (in both human and horse form). Here is a video clip of the moment, followed by excerpts from our conversation, edited and translated from French.

John Daszak and Asmik Grigorian - Strauss: SalomeCreditVideo by medici.tv
How would you describe this moment?

To quote Freud, this is the pleasure principle. In my opinion Salome is not a victim; she makes a choice and asks for the head because she feels like that will make her a complete individual. But she looks at the head of the horse and knows that she will die. She suddenly realizes that there is another head on a silver dish: Salome’s. So we have one entire body, finally.

It is, and there is a tragic dimension in this regard. She begins with the purity of childhood. That is in the milk, which represents purity and the absence of blood. She is a little girl, but ends as a woman. She tried to escape from this world, and she realized there is another prisoner — Jochanaan — who is catching her in a web with his strange language. She fell in love with him because of this language that brings her to another world, and the possibility of escape. So she falls in love with his voice, then she falls in love with his entire body. I think she was waiting for someone to make her free. And this freedom has a paradoxical and tragic dimension. I believe in both of them, but they have to share the same destiny, of course.

How does Asmik Grigorian bring this out onstage?

She is ideal. In rehearsals she had clearly reflected on the work, the personality of Salome, and so all of the little nuances of every phrase have an intimate emotion. It’s extraordinary to see her work with the vocal color like an artist, phrase for phrase. I think she is one of the best for this role. She was Salome incarnate, almost like the Russian school of Stanislavsky, becoming the same person. It’s always believable — always. She is not a singer; she is Salome.

Where do you begin with your analysis, thinking about the relationship between text and music?

The music is extremely powerful and touching. I think it’s Strauss as a composer, realized. It’s the form of a scream, and extremely rich. To hear the voice of Salome in the orchestra — it’s very modern. And while music is the architecture, the text is fundamental. Music is emotion; text is information. Through the text one can reinvent the opera with another point of view on the same object. That’s my aim, to reinvent this object. And I do this through dramaturgy.

What do you say to the people wondering why there’s no dance?

You can’t forget this moment, but I imagined that the dance became intimate. It’s a dance that is performed inside the body of Salome. It’s a petrified dance, and she is a sexual object. So it’s an offering, but ambivalent: “I refuse to give my body.” She becomes the stone. I want to create a problem for the spectator. That problem, I think, is a gift.

Trump Pushes for Interview With Mueller Against Lawyers’ Advice
Her Husband Was a Princeton Graduate Student. Then He Was Taken Prisoner in Iran.
‘Still Can’t Believe It Worked’: The Story of the Thailand Cave Rescue
Follow Joshua Barone on Twitter: @joshbarone.