WHO REALLY OWNS THE ELGIN MARBLES?

However we judge Lord Elgin’s original acquisition of the Parthenon sculptures, it’s easy to wonder whether the Turkish rulers legitimately had the right to allow him to dispose of these artworks.
David Carrier
Who rightfully owns the Parthenon marbles? Just over 200 years ago, when Lord Elgin acquired them, the Ottomans ruled Greece. Installed in the British Museum, London, they are freely accessible and have had a major influence on generations of artists and scholars. But Lord Duveen, the art dealer who sponsored the gallery, had them heavily restored, removing all traces of the original coloring. And the present display, which includes about half of the temple’s sculptures, is highly unsatisfactory, for it turns the original program inside out, showing works meant to be seen high up from a viewpoint which is far too low. Many scholars and political figures have argued that they should be returned to Athens. Indeed, the Greek authorities have recently created an installation intended to accommodate them, arguing that they are a potent portion of the Greek national heritage. In response, it has been claimed that the classical culture of antiquity is now universal, and so not the property of any particular nation. 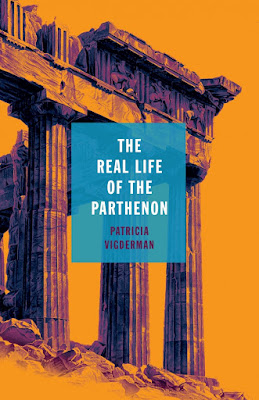 The nimble narrative of Patricia Vigderman’s The Real Life of the Parthenon (Mad Creek Books, 2018) traces out this history in a very winning personal account, describing her travels to Athens, London, and the Getty Villa in Los Angeles, and also to Naples and Southern Italy. While focusing on the Elgin Marbles, she looks also at other similar cases involving cultural repatriation. Too smart to come down on one side of this famously contentious dispute, she offers a subtle dialectical analysis.

However we judge Lord Elgin’s original acquisition, it’s easy to wonder whether the Turkish rulers legitimately had the right to allow him to dispose of these artworks. Perhaps the most revealing point in Vigderman’s book comes when she asks a Greek curator for a response to Joan Connelly’s recently published revisionist history, which argues that the Parthenon sculptures celebrate a scene of ancient human sacrifice. He balks, for it’s one thing to celebrate ancestors who were heroic humanists, and quite another to admit that some of their ways of thinking were not only very distant, but positively unappealing.

The most interesting (and original) philosophical part of this book comes in Vigderman’s characterization of the inherent nature of very old artworks. History writing merely reconstructs the past, which obviously is gone forever, but Greek classical art is present right here and now. More exactly, in the British Museum you view venerable artifacts whose physical qualities and function have changed radically. As she says, the “ghostly survival [of such art] implies not only the unknown past (and a future when you will not be) but also ongoing possibility in being alive, just now” (p. 154). But, it is fair to ask, how is it really possible to speak of the sculptures’ survival when these once sacred works have been cleaned of their original coloring and moved into a museum?

Often the people who are appealing for the return of these marbles speak of their importance for the Greek national identity. But how much relationship, really, is there between present-day Greece and the pagan antique world celebrated by the Parthenon? “Ancient monuments,” so Vigderman admits, “hold people together […]” (182). But that belief surely deserves to be questioned. This Greek cultural identity includes achievements we greatly admire — the philosophy of Plato, the plays of Euripides, democracy (for some males), and wonderful visual art. And others we don’t — slavery is one example. Just as the Parthenon sculptures have changed a great deal, so too has Greece. Even to use the phrase, ‘the ancient Greeks,’ blurs important distinctions, since the Parthenon sculptures come from an Athenian monument.

It’s worth supplementing your reading of this book with a luminous scholarly commentary, which Vigderman’s analysis draws upon: Joan Breton Connelly’s The Parthenon Enigma: A new understanding of the West’s most iconic building and the people who made it (Knopf, 2014). Connelly offers a simpler account of the issues of ownership; she thinks that the Parthenon marbles should be returned. These sculptures, she rightly says, “were never meant to be independent movable objects […]” (p. 345); nor, I would add, were they meant to be displayed in an Athenian museum employing stainless steel mounts, in an installation that Connelly admires.

Here, as is often the case in art history, appeal to intentions is tricky. What we desire, Vigderman rightly says, is both closeness with the distant past and experience of “something uneaten by time, by time that makes the past” (p. 153). It’s surely obvious that both of these demands cannot be fully satisfied, but museums try to do the best that they can. I doubt that anyone is willing to add color to these sculptures, although that would make them look more authentic. The critical question, then, is what these dilemmas says about legitimate ownership of the marbles. Once we turn sacred works into art, and remove the original coloring, why cannot we also move them?

When, starting in the late 18th century, Christian altarpieces were moved into museums, many critics, museum skeptics, wondered if sacred artifacts could survive being turned into artworks. Can an altarpiece survive when it becomes a work of art? The Elgin marbles pose the same question, in more dramatic way, because they come from a vanished pagan culture. The Real Life of the Parthenon is a great achievement — a scrupulous presentation of demanding issues that is fun to read. Vigderman’s philosophical arguments may seem esoteric. And yet, I would not dismiss their significance. After all, have we not learnt from Plato that critical thinking is a necessary prelude to ethical action?

The Real Life of the Parthenon by Patricia Vigderman (2018) is published by Mad Creek Books and is available from Amazon and other online retailers.