If an award-winning curator with the backing of Microsoft can’t gain access to the UK for an academic conference, then who can?
Zachary Small
Abdelrahman Othman at the Egyptian Museum (photo courtesy Abdelrahman Othman)
The UK’s Home Office has rejected the applications of three Egyptian curators for visas to attend a conference in Swansea, Wales, even though the researchers had received grants from the International Council of Museums (ICOM) to attend. The name of the conference? Breaking Barriers. 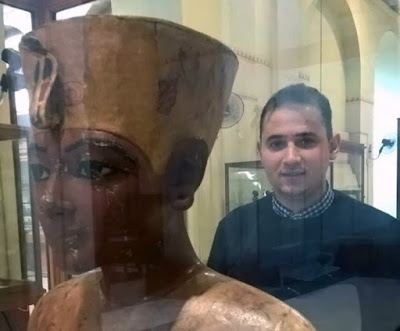 Immigration officials cited low income as one reason why the men were turned away. Reportedly, officials claimed that they were unable to verify the ICOM grant letter contained in the curators’ visa applications. Their grants would have covered flights, accommodation, and living expenses while in the UK.

Abdelrahman Othman was one of the three curators whom the Home Office rejected. An award-winning curator at the National Museum of Egyptian Civilization and an employee at the Egyptian government’s Ministry of Antiquities, Othman has also founded the My Museum in Your Classroom initiative with support from Microsoft.

Speaking with the Museums Association’s Museum Journal, Othman expressed his surprise at receiving a rejection from the UK. “I didn’t see a reason to refuse it. I have a family in Egypt, I’m a PhD candidate and a government employee, and I have a good travel history.”

Othman also noted that he’s never had travel issues when attending conferences in other countries, including the USA, China, Germany, and Japan.

According to the curator, the Home Office mainly objected to his yearly income of $20,400 Egyptian pounds, which is slightly above the average salary in Egypt. Othman also says that the office overlooked his savings.

Even before Brexit, the UK has always had a troubled history with immigration biases and snafus. According to the Home Office’s own data, north African applicants have a 28% chance of being rejected compared to an average rate of only 13%.

Allistair Brown, the Museum Association’s policy officer, confirmed an increases in cases like this to the Journal: “There have been a number of recent instances of the Home Office preventing participants at academic or cultural events from entering the UK. This is a worrying development and we urge the Home Office to give due consideration to all application that are linked to these kinds of events.”

A spokeswoman for the Home Office responded that “all UK visa applications are considered on their individual merits and in line with UK immigration rules.”

Carolyn Graves-Brown, the curator of the Egypt Centre in Swansea said, “We value inclusiveness, and can hardly have a conference on Egyptology museums without Egyptian colleagues being there.”

“Imagine my embarrassment and dismay when these young Egyptians were refused visas. Here we are telling everyone how welcoming we are, how we support young professionals, and visas are refused.”

Updating Hyperallergic on his visa issue, Othman said that he has submitted a new application with original documents and is waiting for the UK’s decision.