SEE THE FIRST TRAILER FOR THE HAPPY PRINCE, WITH RUPERT EVERETT IN THE ROLE HE WAS BORN TO PLAY
Everett plays Oscar Wilde in the biopic, out this fall. 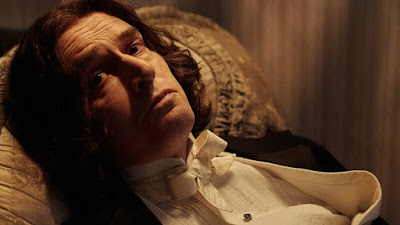 Getting a project about the latter
days of writer and queer iconoclast Oscar Wilde to the screen was a labor of love for Rupert Everett, who wrote, directed, and stars in The Happy Prince. The film, which premiered at Sundance and opens in theaters on October 5, takes a sad, swooning look at the (literal) trials and travails of the celebrated wit, revered now but persecuted in his time. Vanity Fair has the exclusive first trailer for the film.

Everett’s deeply committed performance takes center stage, of course, but he’s joined by a rogue’s gallery of British acting luminaries, including Colin Firth as Wilde’s devoted friend Reggie Turner, Emily Watson as Wilde’s long-suffering wife, and Tom Wilkinson as a priest ministering to Wilde in his final days. Perhaps most germane to our interests, though, is the dashingly handsome Colin Morgan, who plays Alfred Bosie Douglas, Wilde’s younger, bon vivant lover for a time. (Fantasy fans may recognize Morgan as Merlin from the long-running series of the same name.) With its sterling cast and period-piece biopic heft, The Happy Prince could be a dark horse in this year’s Oscar race, particularly for Everett’s fully felt performance.

Rupert first came to public attention in 1981, when he was cast in Julian Mitchell's play and subsequent film Another Country (1984) as an openly homosexual pupil at an English public school in the 1930s.

Rupert was nominated for two Golden Globe awards for his roles in  My Best Friend's Wedding & An Ideal Husband.

Everett has performed in many other prominent films, including The Madness of King George (1994), Shakespeare in Love (1998), Inspector Gadget (1999), A Midsummer Night's Dream (1999), The Next Best Thing (2000), The Chronicles of Narnia: The Lion, the Witch and the Wardrobe (2005), Stardust (2007) and the Shrek sequels. He co-starred with Eva Green in Tim Burton's film Miss Peregrine's Home for Peculiar Children (2016). Coming up he will appear in Swords and Sceptres.

TV Appearances include 50 Shades of Gay, Boston Legal, Who Do You Think You Are?  and more

Everett is a patron of the British Monarchist Society and Foundation. Rupert is an openly gay actor in Hollywood, an outspoken critic towards the introduction of same-sex marriage, stating: '"I loathe heterosexual weddings. The wedding cake, the party, the champagne, the inevitable divorce two years later. It's just a waste of time in the heterosexual world, and in the homosexual world I find it personally beyond tragic that we want to ape this institution that is so clearly a disaster."