By The Canadian Press
MONTREAL—While his unique head-to-toe body art propelled him to international fame on fashion runways and in a Lady Gaga video, the artist and model known as “Zombie Boy” never forgot his humble beginnings as a Montreal street kid, friends said Friday.

The artist, whose real name was Rick Genest, died at the age of 32, his talent agency confirmed Thursday.

Quebec model Rick Genest, known as "Zombie Boy" has died. He rose to fame because of his many tattoos, but also for starring in a Lady Gaga video.

She said he never brought up his fame when he was home in Montreal, where he was part of a community of punks and artists living in a building known as the Fattal lofts near railroad tracks in the St-Henri neighbourhood.

“He had a famous life, where he was going and doing video clips with Lady Gaga, but when he was home at Fattal he was never talking about that, he became the Zombie we always knew,” said Bobette, who preferred to give only her stage name.

“He was putting on his... pants with 10 holes in them, and buying us beer and wine in the parking lot.”

She said the two met as teenagers at Dans La Rue, which ran a drop-in centre for homeless and at-risk youth.

At the time, she said her friend didn’t have a single tattoo and dreamed of becoming a circus performer — a dream he would realize some years later when he and some friends formed a travelling freak show.

Genest got his first tattoo at 16 and went on to eventually cover more than 90 per cent of his body in ink, including the image of a skull over his face. 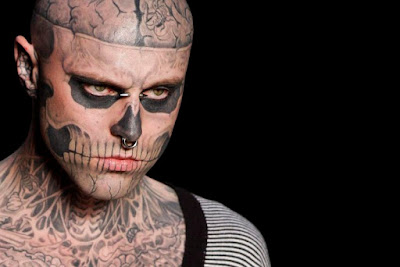