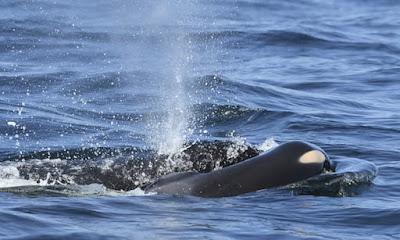 A baby orca whale being pushed by her mother after being born on 24 July. The new orca died soon after. Photograph: David Ellifrit/AP

Seattle’s orcas are dying. That they are dying publicly and painfully may save them.

First was Tahlequah’s calf. Born on 24 July, she died minutes later. Tahlequah buoyed her for a week before mother and calf disappeared.

Then came news Thursday that another young orca, Scarlet, appeared to be dying. Monitors had lost track of Scarlet, who was found alive with her mother Tuesday night by marine biologists who were considering delivering salmon and medical treatment to the ill whale.

In Washington state, the events have focused attention on an effort to repair the broken habitat and stave off extinction of the fish-eating orca. At what governor Jay Inslee dubbed a meeting of the state’s “best and brightest” on Tuesday, the longtime activist Stephanie Solien described the weeks of heartbreak as a message from the orcas. 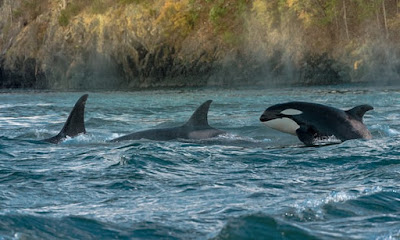 “This is what they have told the world – it is human actions that are responsible for the dead and stillborn calves, the sick and starving adults and the declining condition of the environment in which they live,” Solien said before calling for a moment of silence for Tahlequah and her calf.

At last count, 75 orca live in the Salish Sea, the saltwater trough stretching from south of Seattle up the eastern coast of Vancouver Island. They’re a tight knit, talkative bunch; unlike their seal and shark-eating cousins, they chirp incessantly. They are stressed, and they are starving.

Deafened by sonar and boat noise, they hunt for fish that are too few in number. With each Chinook salmon they catch, they poison themselves a bit more; pollution in the Pacific accumulates at the top of the food pyramid. And their calves are dying.

Three years have passed since an orca calf born in the region survived. In the past 20 years, 40 orcas have been born into the group while 72 have died.

If enough salmon can be hatched and grown fat, if enough boats can be quieted, if the water and land can be cleansed, Seattle’s orcas might just survive. That is the hope.

We built this report. And it sat on the shelf. That was nearly 20 years ago. I don’t believe we have another chance
Phil Anderson
The fear is that this final opportunity to save the orcas will be blown. Or worse,that the opportunity has already passed.

The work of saving the orca in Washington has fallen to the Puget Sound Partnership, a taskforce of leaders from state agencies, interest groups and tribal governments. At Tuesday’s tearful meeting, members’ minds turned toward legacy.

Kevin Ranker, a Democratic state senator representing the San Juan Islands that the orca call home, recalled explaining extinction to his young daughter. Les Purce, a retired university president, described the diligence with which his four-year-old grandson followed Tahlequah’s struggle. The thoughts of Norma Sanchez, a Colville Confederated Tribes councilwoman, were on her newest descendent.

“My first great grandchild was born this year,” Sanchez said. “I would hate to think that when that child is an adult, they would say, ‘I wonder why the orcas went extinct and why we didn’t do anything to protect them.’”
The orcas living in the waters off Seattle eat only fish, mostly meaty Chinook salmon. The region’s three pods – extended families with shared languages – leave the Salish Sea each winter to chase the Chinook on the Pacific coast.

Sign up to the Green Light email to get the planet's most important stories
Read more
Dams, pollution and fishing have depressed Pacific north-west stocks of Chinook, which often appear in supermarkets as king salmon. For decades, environmentalists, tribal members and the fishing industry have called for the removal of dams on the Snake river often blamed for the fishery’s decline. Truly wild Chinook are a rarity; hatcheries prop up the commercial and recreational fisheries.

While pollution reductions, dam removal and a sealion cull are all being considered, the prime aim of the orca recovery effort is to make more fish available swiftly to the killer whales.

Phil Anderson, a fisheries negotiator with the Pacific Salmon Council, said a proposed treaty with Canada will reduce the salmon catch if both governments approve it. The treaty also includes provisions for “a significant amount of money” for hatcheries to produce Chinook for the orcas.

“We will need everybody’s help if we are to get that funding package from the federal government,” Anderson said.

Of course, federal help may be hard to come by. The Trump administration is poised to push back on Washington state water use rules which are unpopular with farmers, the only interest group in the state with the White House’s ear on environmental issues.

Indecision appears to be a greater threat to the orcas. Ranker, the state senator, reflected on a 2001 effort after seven orcas died.

“We all freaked out,” he said, “and we brought together groups like this, and we had all these discussions, and we built this report. And it sat on the shelf. That was nearly 20 years ago. I don’t believe we have another chance.”