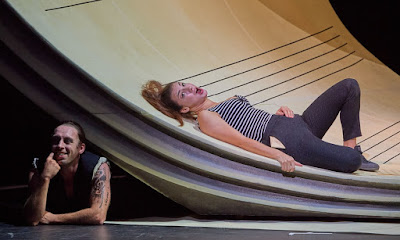 Not going by the book …
Guillaume Andrieux and Catherine Trottman in The Barber of Seville. Photograph: Brian Anderson/Rex/Shutterstock

There’s not a powdered wig or an 18th-century frock coat in sight in Théâtre des Champs-Élysées’ production of The Barber of Seville. Laurent Pelly’s modish take on Rossini’s opera is an extended visual gag on the nuts and bolts of the composer’s trade, the action playing out across the manuscript page. There are some droll touches: the arrival of the soldiers brandishing music stands instead of swords and Rosina’s singing lesson taking place on the score of the very aria she is rehearsing. There are also moments that seem overdone, particularly the snowing giant black confetti in the final scene, perhaps meant to suggest the torrent of musical notes heralding the opera’s completion, but looking like nothing so much as ash from a peculiar volcanic eruption.

Whether these visual games add anything meaningful to the psychodrama of the opera is up for debate. However, the staging does provide an excellent backdrop for a pleasingly physical performance from a youthful, engaging cast. Guillaume Andrieux is a slyly Puckish ruffian of a Figaro, complete with long pigtail and musical clef tattoos, well matched by Catherine Trottmann as a trouser-clad, fiesty Rosina. Only Michele Angelini’s Count Almaviva seems disadvantaged in this modernist take: shorn of his aristocratic hauteur, he comes across as sweetly lovelorn and rather defenceless. 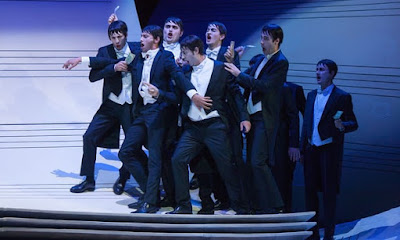 Interaction is everything … The Barber of Seville. Photograph: Tina Norris/Rex/Shutterstock
With the exception of
Trottmann’s light and agile Rosina, this isn’t a production of particularly memorable vocal performances. Andrieux’s delivery of Figaro’s introductory Largo al Factotum was decidedly underwhelming on the Edinburgh opening night (possibly not aided by the fact he was descending from the rafters in a swing). Angelini has a lovely, light, bright tenor but it lacks the power to command Almaviva’s final set-piece aria convincingly. In the event, these potential shortcomings matter less than might be expected: the strength of this production is its success as an ensemble piece, like a fast-paced farce where sharp timing and interaction between the performers is everything.

In the pit, conductor Jérémie Rhorer and the period-instrument ensemble Cercle de l’Harmonie keep the performance fizzing amiably along in softer-hued tones than one is accustomed to hearing in modern-instrument performances of Rossini, underpinning what is undoubtedly a crowd-pleasing romp of a production.
Festival theatre, Edinburgh, ends 8 August.