In their films at the Berlin Biennial, Natasha E. Kelly and Mario Pfeifer address the growing divide in Germany between the politics of liberal inclusion and on-the-ground ignorance, racism, and suppression.
Adela Yawitz 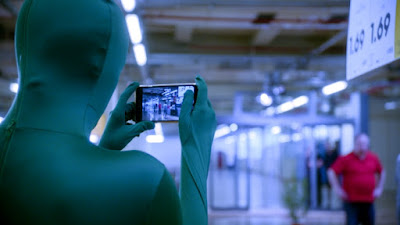 BERLIN — The 10th edition of the Berlin Biennale opened in June. Ambitious yet unpretentious, the exhibition features 46 artists across 5 venues. The Biennale’s curator, Gabi Ngcobo, and her team create a setting for perceiving and relating to the artworks on view with little layering of textual analysis and without tying them explicitly to the artists’ biographies. In fact, the Biennale omits general information regarding artists’ nationalities and dates of birth. This is refreshing, not because it implies that the artworks should stand on their own, but as a political signal against the convention of touting artists’ diversity as a symbol of the institution’s progressive politics or post-colonial criticality. At this Biennale, artists — and curators — of color are the majority, yet this alone is not its primary subject nor its intention.

Among the mostly non-Eurocentric artworks, two videos stand out in directly addressing burning issues in German society: the discrimination, racism and violence against People of Color. Natasha A. Kelly and Mario Pfeifer are two of the few Berlin-based artists in the Biennale, and their films, in German with English subtitles, are some of the only pieces that explicitly ground the exhibition in its local context. The films even seem to provide German audiences with guidance for the rest of the exhibition by introducing such meta-questions as: What are the challenges facing all artists showing artwork in white institutions? How are these institutions, as public resources, presenting diverse artistic voices? And why are these issues so urgent at this moment in Germany?
In Milli’s Awakening (2018), artist and academic activist Natasha A. Kelly weaves together portraits of eight Afro-German women of different generations. Their lives have all been touched by art, in one way or another, and many of them tell stories of structural barriers and marginalization in and out of the art world. Maciré, an activist from Bremen recounts how she understood in retrospect that her film, shown at the local museum, had been used to legitimate the exhibition as a whole by providing a non-white, critical perspective. She has since decided to invest in working for her own community, not for the white audiences of the Kunsthalle. Diana from Bavaria, who identifies as intersex, recalls taking refuge in photography to overcome her discomfort with her own body as a teenager. And the artist Maseho reads from her tongue-in-cheek guide for Black POCs traveling in Germany; she advises saving time by telling Germans you are from “USA” or “Afrika,” since other answers would devastate their view of the world.

Beyond their connection through art, the women share the lived experiences of being Black in Germany. Their stories reflect a sorry state of affairs, and little progress over the last 30 years. Nadu matter-of-factly recalls the feeling, coming to Germany as a young woman, that her skin color made her less of a human being in other people’s eyes, while Patricia shares the alienating experience of being one of only three POCs in her whole town. Through her subjects, Kelly pointedly addresses the pervasiveness of racism in Germany. Their lived experiences reveal a schism between their skin colors and the collective self-perception of their homeland as a homogenous expanse of whiteness.

Mario Pfeifer’s film Again (2018) reflects another uncomfortable truth to German audiences, this time about the rise of identitarian movements and their targeting of vulnerable minorities. Pfeifer stages a reenactment and tribunal on the disturbing case of Schabas Al-Aziz, a young Iraqi citizen who was found frozen to death in a forest outside Dresden last spring. Pfeifer reconstructs an altercation between Al-Aziz and four German citizens, which occurred almost a year beforehand in a supermarket in the village of Arnsdorf. The four men claim to have taken justice into their own hands to protect their community from Al-Aziz. Using cellphone footage, news reports and eyewitness accounts, Pfeifer’s step-by-step reenactment of the situation is narrated by two attractive “hosts” who intermittently freeze the action to consider each possible version and outcome. In the manner of a public-service announcement, the two narrators ask: What is the difference between moral courage and street justice? Why did these men feel justified to violent crime, and why did their community protect them?

The case is complex: Al-Aziz had epilepsy and arrived in Germany in 2015 in the hopes of receiving better medical care. Years of spotty treatment, as well as the trauma of his voyage and being isolated from his family, may have triggered other mental-health issues. On the afternoon in question, he visited the supermarket three times, trying to communicate a problem with his phone card. He was holding two bottles of wine, which he refused to put back, making the cashier nervous. Different eyewitnesses experienced his behavior as violent, confused, or frustrated. Suddenly, four large men walked into the market and carried Al-Aziz out violently, tying him to a tree and leaving him there until the police arrived. The four have been hailed in their community as heroes; the case against them has been dismissed due to “lack of public interest” — and, of course, the victim’s inability to explain his side. No one has been charged with Al-Aziz’s death, which occurred in the woods an hour away from Arnsdorf. 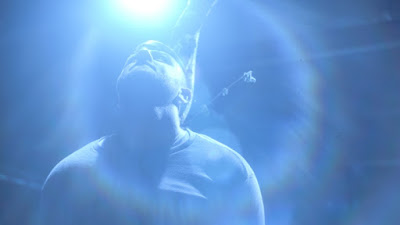 Pfeifer’s jury of Germans hearing the case presents a variety of perspectives: an elderly woman is moved to tears by lack of compassion toward the sick refugee, but a Black German is unsurprised — he recalls his friend being killed because of his race and his killers receiving only a light sentence. The film is a damning, distressing document of Germany’s prejudices and naiveté, of its society’s tendency to define community and threat racially and its courts and police looking the other way when extreme-right organized violence occurs. Together with Kelly’s film, Again addresses the growing divide in Germany between the politics of liberal inclusion and on-the-ground ignorance, racism and suppression. In the context of an international art Biennale in the center of a cosmopolitan city, it’s crucial that this divide is acknowledged. Kelly’s and Pfeifer’s films lay bare the relevance of Biennale’s questions to its host city and country, rendering it global in its reach without becoming placeless.

The Berlin Biennial continues at various venues through September 9.