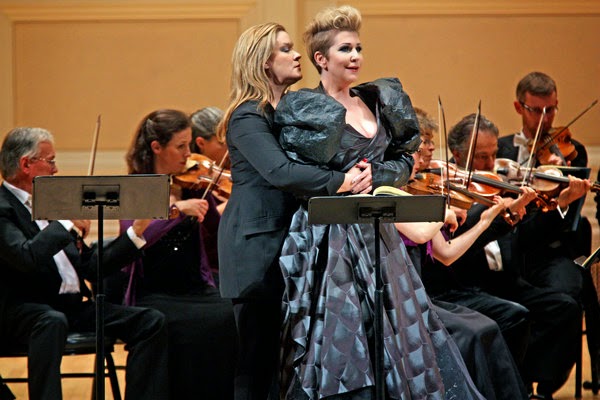 Three of my 10 choices for the best events of 2014 were presented in the intimate halls and clubs that are increasingly popular in classical music, an encouraging trend. I begin, though, with an unforgettable production in an enormous space.

Berlin Philharmonic’s ‘St. Matthew Passion’ As part of the White Light Festival, Lincoln Center took over the vast Drill Hall of the Park Avenue Armory to present the director Peter Sellars’s overwhelming staged version of Bach’s “St. Matthew Passion,” with the Berlin Philharmonic and the Berlin Radio Choir under the conductor Simon Rattle. The inspired vocal soloists, especially the plaintive tenor Mark Padmore as the Evangelist, along with the superb choristers and the musicians of this great orchestra, all courageously gave themselves to this intensely dramatic concept. This was a shattering and profound “Matthew Passion.”
‘The Death of Klinghoffer’ After all the controversy, and the demonstrations from hundreds of protesters, audiences at the Metropolitan Opera were finally able to hear “The Death of Klinghoffer” rather than just hear about it. In the Met’s grimly realistic production, by Tom Morris, the composer John Adams’s opera, with a libretto by Alice Goodman, came across as a searing yet ruminative work that explores a horrific event and the seething tensions behind it. David Robertson conducted magnificently. The only wrong call by Peter Gelb, the Met’s general manager, was canceling the live in HD telecast as a gesture of compromise to the Anti-Defamation League. Still, he and the Met deserve credit for presenting the opera, which, is, tragically, all too timely.
The critics of The New York Times survey the best film, television, pop and classical music, theater, dance, visual art and video games of 2014.
‘Prince Igor’ Borodin left “Prince Igor” a shambles. He wrote copious amounts of inspired music. But what goes with what? Every performance must be a reclamation job. For the magnificent, updated production that the Metropolitan Opera presented, the ingenious director Dmitri Tcherniakov and the conductor Gianandrea Noseda devised a new edition (call it the Met version) that made “Prince Igor” seem one of the landmarks of Russian opera. The bass Ildar Abdrazakov, in the title role, headed a compelling cast.
Handel’s “Alcina,” at Carnegie Hall Talk about operatic landmarks: Handel’s allegorical fantasy “Alcina” is right up there. The English Concert, the acclaimed period instrument ensemble, with Harry Bicket conducting, presented an elegant, dramatically riveting concert performance at Carnegie Hall, with a splendid cast headed by the superb mezzo-soprano Joyce DiDonato in the title role.
David Lang’s ‘Collected Stories’ During his residency at Carnegie Hall, the composer David Lang devised an imaginative weeklong series of six programs titled “Collected Stories.” Each one explored different ways composers have used music to tell tales. I’m cheating a bit by singling out two programs. The first, “Hero,” paired the singer Benjamin Bagby’s version of the Anglo-Saxon epic “Beowulf” with a rare staging of Harry Partch’s genre-defying opera “The Wayward,” about hobos. The final program, “Memoir,” offered three intriguing John Cage pieces (performed simultaneously!) and the premiere of Mr. Lang’s restless 40-minute solo violin work, “mystery sonatas,” played stunningly by Augustin Hadelich.
Seattle Symphony, Carnegie Hall Over four years, the Spring for Music festival brought major and regional orchestras to Carnegie Hall for a weeklong series. The ensembles were chosen for the creativity of their proposed programs. Sadly, this was the final festival. The standout was the Seattle Symphony, thriving under its dynamic music director, Ludovic Morlot. The program offered John Luther Adams’s mesmerizing “Become Ocean,” a 40-minute work that evokes the sea; Varèse’s “Déserts”; and, another oceanic piece, Debussy’s “La Mer.” The performances were spectacular.
‘Modern Times,’ New York Philharmonic As part of its continuing exploration of film music, the New York Philharmonic, in a special event, screened Charlie Chaplin’s classic 1936 comedy “Modern Times” while the orchestra, conducted by Timothy Brock, performed a beautifully restored edition of the rich, vivid original film score that Chaplin composed. How about “City Lights” next?
Here, as promised, are three memorable events that took place in small spaces.
Marino Formenti, New York Philharmonic Biennial Thanks to Alan Gilbert’s vision, the New York Philharmonic’s inaugural Biennial, an ambitious 11-day festival of contemporary music, was a tremendous accomplishment. One of the most intimate events of the festival was especially fascinating: “Liszt Inspections,” a late-night recital at the cozy Kaplan Penthouse featuring the impressive Italian pianist Marino Formenti, who played visionary works by Liszt alongside pieces by diverse modern masters. In this context, Liszt emerged as a proto-modernist.
David Greilsammer, Le Poisson Rouge The brilliant Israeli pianist David Greilsammer has a gift for devising programs that intriguingly juxtapose old and new music. At the inviting Greenwich Village music club Le Poisson Rouge, Mr. Greilsammer had an audience engrossed as he alternated sonatas by Scarlatti, played on a piano, with sonatas by John Cage, played on an adjacent prepared piano. (You can hear this program on his Sony recording.)
Benjamin Hochman, SubCulture One of the newest performance spaces in New York is SubCulture, in the East Village, an acoustically lively, informal hall with seats for 150 and a bar area for drinks and snacks. On one special night, the exciting, inquisitive pianist Benjamin Hochman played a bold program of contemporary theme-and-variations pieces. There were daunting works by Oliver Knussen and Berio, a premiere by Tamar Muskal and, to end, Frederic Rzewski’s epic, hourlong, audaciously inventive variations on a Chilean protest song, “The People United Will Never Be Defeated” (1975).