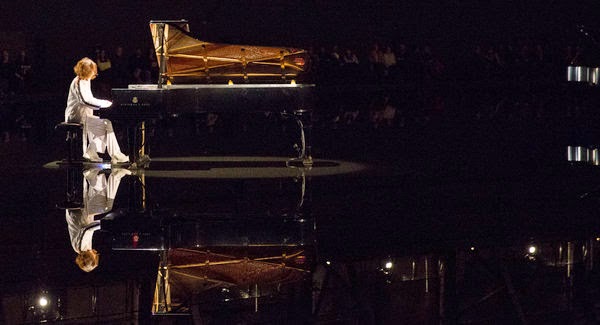 Hélène Grimaud performing “Tears Become ... Streams Become ...,” as part of the artist Douglas Gordon’s installation at the Park Avenue Armory. Credit Benjamin Norman for The New York Times
When I first walked into the vast Drill Hall of the Park Avenue Armory on Tuesday for the opening-night performance of “Tears Become ... Streams Become...,” a collaboration between the pianist Hélène Grimaud and the artist Douglas Gordon, the setting did not look particularly enticing. The Drill Hall, of course, is an awesomely huge space of 55,000 square feet with a lofty vaulted ceiling. Almost its entire floor had been given over to this compelling, boldly original work, a dramatic combination of art installation, light show and piano recital that explores themes of water.
Chairs were set up around the rim of a slightly sunken rectangular area where the piece is staged, atop a floor covered by plain black-painted wood panels. Two grand pianos were placed within the space, one in the center, the other off to the side.
Then, very slowly, water started seeping up from cracks between the black wood panels. Soon, small shiny pools started forming. As the pools grew, you saw reflections of the Drill Hall’s ceiling as well as mirror images of the people sitting around the rim. 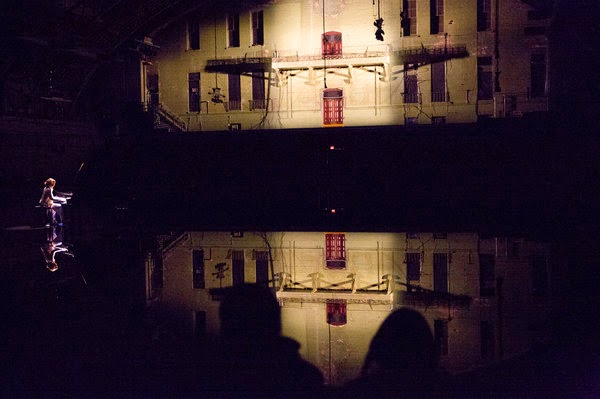 In “Tears Become ... Streams Become ...,” Ms. Grimaud plays eight works in a pool that reflects the vast Drill Hall of the Park Avenue Armory. Credit Benjamin Norman for The New York Times
It took about 20 minutes for the entire floor to fill with water, in silence. The process was riveting. Expanding pools of water kept swallowing up dry patches of the floor that continually changed shape. One patch near me first looked like India, then became Virginia, then a tiny Cuba, which was finally engulfed in a silent flood.
When the whole space was filled (an inch or so deep), the reflected image of the Drill Hall’s ceiling was beautiful. And scary. If you fell over the edge, it seemed, you might tumble into a deep cavern.
Then, the lights darkened until the hall was almost completely dark. You heard the subdued sloshing of someone walking on the flooded space: Ms. Grimaud, of course. Only after she was seated at the piano in the center did the overhead lights brighten enough for her to be seen. (The lighting designer is Brian Scott.)
She then began a 60-minute program, an inspired selection of pieces by Berio, Takemitsu, Ravel and others that in various ways explore images and sensations of water. (Visitors to the armory during the daytime can also experience this work as an installation with a computerized piano featuring Ms. Grimaud’s recorded performance.)
Ms. Grimaud, besides being an elegant pianist, is an artist game for adventure and a committed wildlife conservationist. She and Mr. Gordon, whose work encompasses video, installations, photography, sculpture and text, discussed this project for a year. Mr. Gordon was particularly inspired by the perception that a “field of water is endless,” as he writes in the program for the work, that “it goes on, and on, and on.”
He poses two questions: “How many times have you cried in your life? How much fluid have you given to the world?” The way the water seeped into cracks in the floor at the start of this piece seemed to be a metaphor for crying. We all have within us an endless supply of tears, just waiting to be tapped.
Ms. Grimaud began with Berio’s 1965 “Wasserklavier,” a subdued, undulant, pensive water piece written essentially in a tonal idiom, though the harmonic language is diffuse, elusive and tart. This led into Takemitsu’s “Rain Tree Sketch II — In Memoriam Olivier Messiaen,” a dreamy, restless piece written in 1992 in tribute to the towering French modernist.
Ms. Grimaud then played Fauré's Barcarolle No. 5 in F sharp minor, composed in 1894. Coming after the Berio and the Takemitsu, the Fauré sounded almost contemporary. Though the music may evoke lapping water and boat songs, it is filled with craggy episodes and quixotic flights.
Ravel’s “Jeux d’Eaux” (“Fountains”), from 1901, uses rippling piano figurations, Impressionist harmonies and ancient-sounding pentatonic melodies to capture the sensation of swirling water. Ms. Grimaud’s beguiling performance was at once restrained and impetuous. “Alméria” from Albéniz’s piano suite “Iberia,” composed a few years after the Ravel, is a musical portrait of a coastal city in Andalusia, in which dancing episodes with jagged rhythms give way to an extended rumination through a long, wistful melody.
She then gave a brilliant account of Liszt’s extraordinary “Les Jeux d’Eau à Villa d’Este,” a musical evocation of the impressive fountains at a villa in Italy where Liszt often stayed. And in this setting, the Andante movement from Janacek’s “In the Mists” suite (1912) came across as depicting water in its misty, hazy states.
The program ended with the work that Mr. Gordon and Ms. Grimaud used as a starting point for the entire project, Debussy’s prelude “La Cathédrale Engloutie” (“The Sunken Cathedral”), inspired by the legend of a cathedral that rises from the ocean, bells tolling, then sinks back into misty, watery oblivion. Looking into the pool, you could swear that this cathedral was about to emerge.
When the applause started, Ms. Grimaud simply walked slowly through the water and wandered off, remaining in character and never really bowing. Mr. Gordon’s note in the program ends with: “And as the water collects, the space it inhabits will never be the same again.” How true.