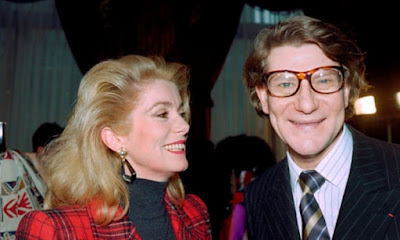 Catherine Deneuve is auctioning her collection of haute couture outfits, many of them one-off pieces made by Yves Saint Laurent.

The French actor was the haute couturier’s muse for many years, and at a celebration of the 40th anniversary of his career in 2002 she told Saint Laurent: “My most beautiful love affair is with you.”

Three hundred lots will go on sale next year, half at Christie’s; half in an internet auction. 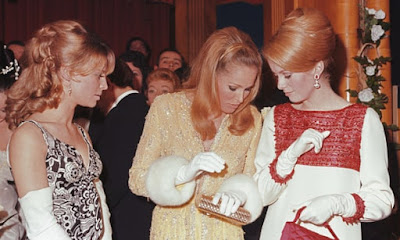 Deneuve, 75, said she no longer had space for the collection as she was selling her property in Normandy, where the clothes are kept. “They are the creations of a man who was so talented and who only created to make women more beautiful,” she said.
The actor was 22 and married to the British photographer David Bailey when she first met Saint Laurent. She was due to meet the Queen and asked the French designer to make an evening dress for the occasion. Deneuve arrived at his Paris studio with a photograph of a Russian model wearing a gown that she liked from the previous year.
“He agreed to make it for me … it was very Slavic, pure and strict.” Afterwards she proposed he design her costumes for the film Belle de Jour. Saint Laurent dressed Deneuve for 40 years. He died in 2008.
“The piercing seriousness of Yves Saint Laurent during the fittings and his shy grace in life have charmed all the years we have passed together,” Deneuve said. “I was just 20 years old and so it was a privilege to have access to all this voluptuous luxury, to train my eye and my tastes at his side.” 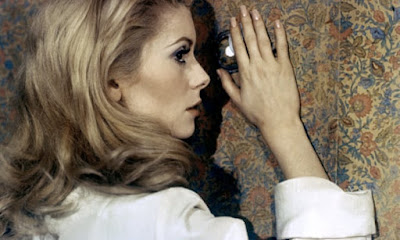 Catherine Deneuve in 1967’s Belle de Jour. Photograph: Allstar/Five Film
Christie’s France president, François de Ricqlès, told Agence France-Presse the sale brought together “one of the most famous French actors and one of the most illustrious French designers”.

The collection includes coats, suits, dresses and accessories, many of them one-off pieces. Among the most covetable is a mini dress with a pearl fringe from the 1969 spring/summer collection worn when Deneuve met Alfred Hitchcock, which is valued at €5,000 (£4,440).
The lots will be exhibited between 19 and 24 January at Christie’s in Paris.