YOU GOTTA FIGHT FOR YOUR RHYTA TO PARTY A first century BCE Parthian lion rhyton now at the Getty Villa, made from gilt silver, stones, and garnets (image via the Getty Open Content program)

CAMBRIDGE, Massachusetts — At the Harvard Art Museums, a newly opened exhibition underscores the connection between animals and alcohol. Animal-Shaped Vessels from the Ancient World: Feasting with Gods, Heroes, and Kings which runs until January 6, 2019 in the Special Exhibitions Gallery, brings together close to 60 vessels from across the ancient Mediterranean to look at the performative function of drinking vessels within ancient feasting rituals and religious rites. The pieces demonstrate that art and alcohol have always been a potent combination.

Many of the vessels now on display in Animal-Shaped Vessels from the Ancient World are large drinking cups called a rhyton, (plural rhyta or ῥυτόν in Greek), a word which stems for the verb “to flow.” Think of rhyta as the classy version of ancient beer funnels, albeit ones that were normally used for religious rituals and feasting with wine rather than for christening a Midwestern football game. And much like the modern beer funnel, you could not set a rhyton down without drinking most of its contents first. The vessel is meant to be held or to be drunk from rather than act as a static participant in the feast or symposium. The bottom of the vessel is purposefully made so that you must empty its contents into your mouth. The art within the dining room often encouraged oenophilist indulgence. A number of mosaics from Antioch and elsewhere in the ancient world depict the mythical story of the drinking contest between Dionysus and Heracles. 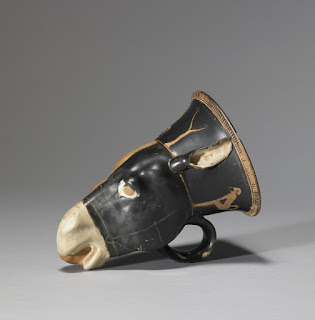 Although the drinking vessels exemplify a long tradition of ritualized drinking, they also reveal its role in religious ritual. In comments to Hyperallergic, Laura Nasrallah, a professor of New Testament and Early Christianity at Harvard Divinity School, noted the ability of these objects to tell us about how food and drink facilitated and mediated a relationship with the divine:

First, as the show’s title indicates, we can think about feasting with the gods. How is food and drink deeply intertwined with religious practice? We can think about this today in light of common religious practices such as Eucharist, an after-church pot luck, Shabbat dinner, or breaking fast with an iftar. The objects collected in the show help us to see even gods engaged in drinking and eating—a mosaic from Antioch, usually in the Worcester Art Museum, shows a drinking contest between the god Dionysus and Herakles.

Mosaics with mythical drinking contests or depictions of symposia were common, particularly since when reclining on couches (typically arranged on the ground) one was bound to stare at the floor a fair amount. Floors were in many ways the walls of the ancient world: They gave you art to engage with and chat about as you ate, drank, and waited for the next course. 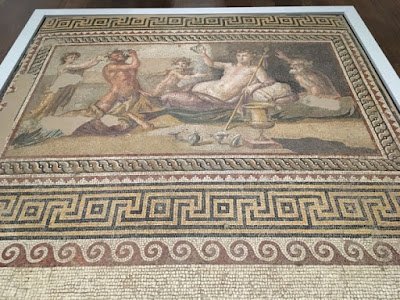 Drinking Contests were a common theme in floor mosaics from the ancient world. This dining-room mosaic is from Antioch and dates to the second century CE. It is now on display at the Harvard Art Museums but is from the Worcester Art Museum (image by Laura Nasrallah for Hyperallergic).

Beyond simply depicting animals often sacrificed to the gods, the drinking vessels on display at the Harvard Art Museums also show our own curious connection to animals. As Nasrallah notes:

The objects on which the show focuses provoke us to think not only about the line between humans and gods, but also human animals and other animals. As many rhyta were tipped up to the mouth, what another person at table or triclinium would see is an animal face obscuring the face of the drinker: a gazelle, a lion, an ass. The phenomenon is both funny and thought-provoking. What’s the line between the human and other animals? From Roman antiquity, for example, we know the funny story of Lucius being changed into an ass. How do we define humanness? Or, alternatively, how can we be transformed for the better or the worse?..........