Marker’s The Owl’s Legacy presents a complex portrait of Ancient Greece in 13 episodes that revolve around single words. 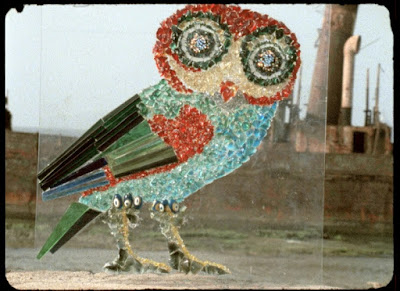 A second decade into the 21st century and there are still works by major filmmakers that are finally seeing the light of day. This year alone saw the US premiere of Raúl Ruiz’s “final” film, The Wandering Soap Opera (1990/2017), which Ruiz’s wife and frequent collaborator Valerie Sarmiento (a director in her own right) assembled from Ruiz’s accumulated footage. With the help of Peter Bogdanovich and Netflix, Orson Welles’s 48-years-in-the-making The Other Side of the Wind is set to stream on the Netflix and open in select theaters on November 2. And, in the realm of auteur television, Chris Marker’s The Owl’s Legacy (1989) will enjoy a week-long run at Metrograph starting on November 9, before Icarus Films releases the series on home video. 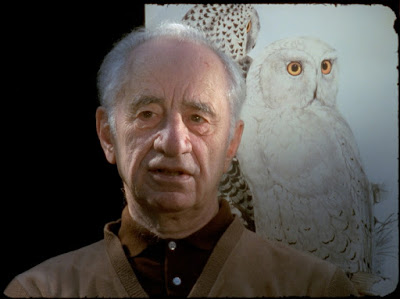 Commissioned by the Onasiss Foundation and TV channel La Sept, Marker’s 13-part series concentrates on ancient Greece and its enduring impact on contemporary society. At first glance, the series appears rather conventional and hardly distinguishable from the educational programs broadcasted on television. However, Marker creates a complicated portrait of ancient Greece, full of differing viewpoints that are finally funneled through his own vision. The series consists of talking head shots, featuring filmmakers (Elia Kazan, Theodoros Angelopoulos), composers (Iannis Xenakis), philosophers (Cornelius Castoriadis, Michel Serres), professors (Mark Griffith),  and historians (Linos Benakis, Oswyn Murray, Jean-Pierre Vernant) that Marker cuts away from to archival footage, clips from films, and footage he himself recorded.
In every shot, there is an owl, whether seen taking up an entire wall in the background or manifesting as a sculpture inches away from the interview subject. Each person gets their own owl — the bird that accompanies Athena and the everlasting symbol of knowledge. Resembling banquets held in Ancient Greece, Marker stages a number of dialogues in which groups of people gather, chat, eat, and drink wine at tables in Berkeley, Paris, Tbilisi, and Athens. He returns to them intermittently throughout the series; in the midst of their conversations, the camera lingers and swerves around animated faces.

Marker devotes each 26-minute episode to a concept crystallized by a single word: symposium, myth, nostalgia, tragedy, music, olympics, and more. Episode six, “’Mathematics,’ or the Empire Counts Back,” begins with pre-Socratic logic and Pythagoras, to Plato, followed by interludes on artificial intelligence, Heisenberg’s uncertainty principle, and computers. A testament to Marker’s playfulness (besides crediting himself, “Chris. Marker,” with the title of “Skipper,” rather than “Director,” in the end credits), he’ll list and name the software, technology, and animals seen in The Owl’s Legacy — each deserve as much billing as the people in the series.

In the second episode, “’Olympics,’ or the Imaginary Greece,” the ancient state as a myth and ideal leads to the rise of totalitarianism and the Nazi ideology in the 20th century. Later on, in “’Democracy,’ or the City of Dreams,” the Greek-American director Elia Kazan says that Greek democracy is a legend, going so far as to consider it not a democracy at all. “90 percent of the people in Athens were slaves,  and [the] ten percent were supported by these slaves.” Further in the episode, Yale classics scholar John Winkler sees “political bluff” and smear-mongering as the continuity between Western and Athenian culture. Marker presents footage of George H.W. Bush, François Mitterrand, and other political figures in the West, as Winkler notes their ability to elude, evade, and scheme in the name of democracy.
In a recent article, the writer Kodwo Eshun pointed out how the Onassis Foundation banned the series because of one particular comment: It had “taken offense at George Steiner’s statement that ancient Greece [has] nothing to do with modern Greece; that modern Greece was a farce and a joke.” It wasn’t until 2007, when the Otolith Group collaborated with Marker in the first Athens Biennial, that the series played in Greece. 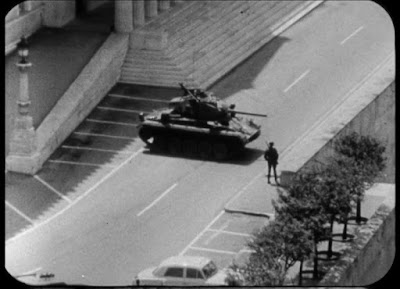 Chris Marker, The Owl’s Legacy (1989) (image courtesy Icarus Films)
After The Owl’s Legacy, ambitious in its scope but a bit tame in form, Marker would push further into different fields, such as more installation work (Zapping Zone, Silent Movie), CD-ROM (Immemory), and virtual reality (his Second Life museum, Ouvroir). Marker never remained in one medium for long, and The Owl’s Legacy is one of the missing pieces in a varied and unpredictable career.