Plus, a Paul Rand photogram sells at auction, and Christie’s and Sotheby’s sell a number of Chinese and Southeast Asian works and artifacts. 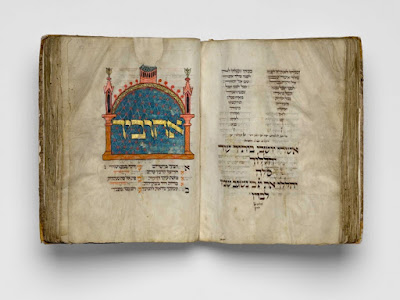 The Museum of Fine Arts, Houston has acquired three significant pieces of Medieval art: a large, rare Hebrew codex known as “The Montefiore Mainz Mahzor” (c. 1310–20); a rare surviving silver-gilt and enamel Spanish precessional cross (c. 1400); and an architectural drawing of Rouen Cathedral. The acquisitions were purchased through a fund dedicated to the museum’s acquisitions endowments. The works are currently on display in the European Art Galleries of the Audrey Jones Beck Building. [via email announcement]
Stanford University’s Denning House has acquired a 17-foot sculpture by Ursula von Rydingsvard titled “MOCNA.” The sculpture was the first piece commissioned for the Denning House art collection, which plans to acquire one piece each year from emerging and established artists. The sculpture has been placed on display in front of Denning House. Denning House has also acquired two dye sublimation prints by Trevor Paglen: “Matterhorn (How to See Like a Machine) Brute-Force Descriptor Matcher; Scale Invariant Feature Transform” (2016) and “Lake Tenaya Maximally Stable Extremal” (2016). Paglen’s work is on display on both floors of Denning House and will be available to see on monthly tours of the building beginning in the spring. The acquisitions were made possible through a gift from Roberta Bowman Denning (undergraduate class of 1975, MBA class of of 1978) and her husband Steven A. Denning (MBA class of 1978), past chair of the Stanford Board of Trustees.

Last week, the Sydney Contemporary Art Fair made a record total of $21 million in sales. John Mawurndjul’s bark painting “Ngalyod – The Rainbow Serpent” (1999) sold for an artist record of $140,ooo. The painting’s previous anonymous owner had been storing the work under their bed for the past 10 years. There has been renewed interest in Mawurndjul’s work due to his current retrospective at the Museum of Contemporary Art Australia. Approximately $10 million of the total sales from the fair will go to the 300 exhibiting artists………………
https://hyperallergic.com/460448/stanford-acquires-ursula-von-rydingsvard-sculpture-and-museum-of-fine-arts-houston-acquires-medieval-art/