In a photoshoot in front of the Egyptian pyramids, Melania Trump reminds us that fashion is political. 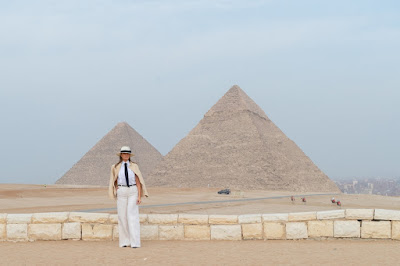 This past weekend, Melania Trump once again drew attention to herself for her controversial choice of outfit as she posed in front of Egypt’s pyramids and Great Sphinx. She wore a cream-colored suit, white button-up shirt, black tie, and a matching cream fedora, later remarking, “I wish people would focus on what I do, not what I wear.”
The Internet was quick to lambaste the First Lady for her sartorial blunder, comparing her to Michael Jackson’s “Smooth Criminal,” to Hannibal Lecter in leisurewear, to the characters in Out of Africa, and most notably, to the villain in Raiders of the Lost Ark, who was hired by Hitler to steal the Ark of the Covenant.
Melania Trump in front of the pyramids and the Great Sphinx
Frankly, it’s difficult to focus on what Melania does, rather than what she wears. For starters, I’m not exactly sure what it is that she does in the first place. But more importantly, fashion is political. When she tours Africa in a white pith helmet, for instance, ignorant to the history of violence and colonization behind the headgear, people notice. When she visits children who have been torn away from their families in a jacket that says, “I Really Don’t Care. Do U?” people, understandably, take notice. And when she shows up in stiletto heels to the aftermath of Hurricane Harvey, choosing an unarguably impractical style of footwear for community service, people notice. One faux pas of these sorts, sure, could be deemed an accident or an oversight, but at a certain point, we have to hold her to account. And so, the photos in Egypt should come as no surprise. Melania Trump stands before the great pyramids like a colonizer in front of her conquests……………..