THE METROPOLITAN MUSEUM OF ART BROKE ITS ALL-TIME ATTENDANCE RECORD FOR A SINGLE EXHIBITION. 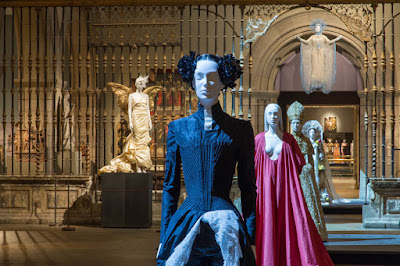 Installation view of “Heavenly Bodies: Fashion and the Catholic Imagination.” Photo © The Metropolitan Museum of Art.

Forty years after he cast a spell on Metropolitan Museum of Art visitors, King Tutankhamun’s reign has been usurped by the blockbuster “Heavenly Bodies: Fashion and the Catholic Imagination.” The Costume Institute exhibition, which closed on Monday, was the most visited show in the museum’s 148-year history, the Met announced yesterday. It attracted 1,659,647 visitors to the Met’s main branch on Fifth Avenue and its Washington Heights outpost, the Cloisters, during its five-month run, beating the previous record of 1,360,957 visitors set by 1978’s “Treasures of Tutankhamun.”

The attendance figures for “Heavenly Bodies” include 1.43 million people who saw the part of the show at the Met’s main branch, and another 228,737 who visited it at the Cloisters—although, as Los Angeles Times critic Christopher Knight pointed out on Twitter, it’s unclear whether a person who went to both locations would be counted as one visitor or two. In defense of the Met, the two locations are, at a fair estimate, more than six miles apart, which requires a concerted trek. And in any case, “Heavenly Bodies” would still be the new record-holder, with some 70,000 more people seeing it at the Met’s main branch than lined up for King Tut.

This news comes on the heels of the Met’s announcement that next year’s Costume Institute exhibition and gala theme will be camp, and reports of the museum’s plan to sublease the Breuer building to the Frick Collection.