FIVE CENTURIES OF PLAY BETWEEN WORD AND IMAGE

Word and Image at the Dallas Museum of Art emphasizes just how varied the art and technology of print can be.
Lydia Pyne 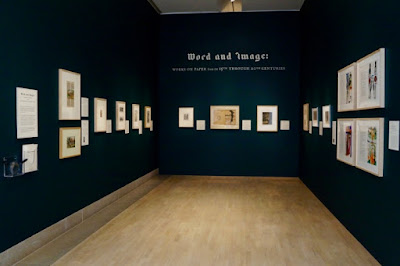 Installation shot of Word and Image: Works on Paper from the 15th Through the 20th Centuries at Dallas Museum of Art (photo by the author for Hyperallergic)

DALLAS — When Johann Gutenberg introduced a mechanical, moveable printing press to the European world around 1450, his invention revolutionized the way that information travelled. Gutenberg’s moveable type meant that text could be assembled, printed, and disseminated faster than one-off, hand-scribed documents; it also meant that text could and would be introduced to readers on a scale that was unprecedented in the history of putting ink to paper.

Mass production of print introduced a new relationship between art and text, one that would be different than the tradition of medieval illuminated manuscripts. For the next 500 years, printers and artists would negotiate how art and text could co-exist and, more interestingly, how the two could co-evolve. At the Dallas Museum of Art, the exhibition Word and Image: Works on Paper from the 15th Through the 20th Centuries shows just how varied the art and technology of print can be. 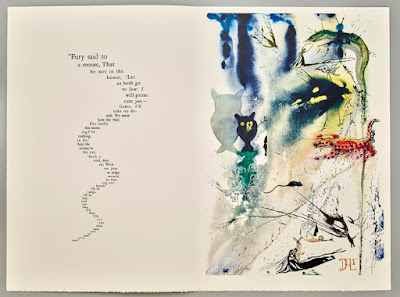 Word and Image draws on a plethora of different printed pages from artists that include Pierre Bonnard, Rembrandt van Rijn, Eugène Delacroix, Olga Vladimirovna Rozanova, and Salvador Dalí. “Artists began experimenting with etching and engraving techniques after the introduction of the printing press…” the exhibit offers. “The works on view in Word and Image explore this experimentation beginning in the 15th century and continuing to the breakthrough of new technologies in the 19th and 20th centuries.”
The exhibit’s earliest pages are biblical and historic, representative of the mass-print projects of the 15th century. Word and Image includes a page from the Cologne Bible, printed in the late 15th century, and the first bible to be printed with more than 100 artistic miniatures that break up the blocks of text. (This set a precedent for European bibles to have illustrations printed into the text.) There is also a page from Liber Chronicarum (the Nuremberg Chronicle) illustrating “The Drunkenness of Noah,” which was printed in 1493 using a woodcut press, rather than moveable type; the illustration of Noah with his sons was hand-colored using watercolor pigments. Also on display are Jacques Callot’s illustrations of “The Miseries and Misfortunes of War” (1633), poignant etchings of the human suffering associated with Europe’s Thirty Years War (1618-1648). Callot’s original illustrations were etched on metal plates, and when the pictures were printed, explanatory text and critique was inserted below the images. Whether to simply illustrate the printed text or to serve as a visual text itself, the pages on display make it clear that one without the other would leave both poorer. 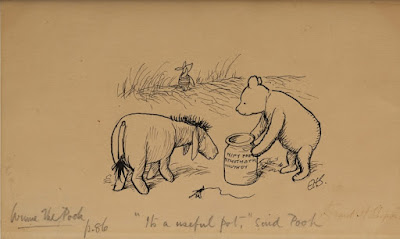 The exhibit’s 20th-century printed pages show the continuing evolution of text and illustration as part of the history of print. Sketches from Ernest Howard Shepard’s Winnie-the-Pooh illustrations remind audiences that, before an illustration can be mass-produced, it must be drawn. The handwritten notes on the sketch — “‘It’s a wonderful pot,’ said Pooh,” and “p. 86” — show how art and illustration is a planned part of a printed book. And Salvador Dalí’s illustration of Alice in Wonderland is, well, everything one might expect from Dalí imagining Alice’s adventures — bright colors, melting objects, surreal images creating a feeling that accompanies the text rather than drawing a specific story……………..