NIKKI HALEY TO RESIGN AS TRUMP’S AMBASSADOR TO THE U.N.

Nikki Haley will be leaving her role as the United States ambassador to the United Nations by the end of the year. Here’s a look at the numerous issues she tackled as the public face of the Trump administration’s foreign policy.Published OnOct. 9, 2018CreditCreditImage by Tom Brenner/The New York Times
By Maggie Haberman, Mark Landler and Edward Wong
President Trump’s ambassador to the United Nations, Nikki R. Haley, said on Tuesday that she would resign at the end of the year, marking the departure of one of the few high-profile women in the Trump administration. 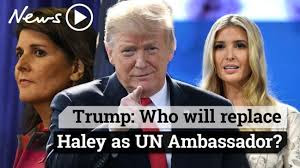 Ms. Haley, a former Republican governor of South Carolina, had been an early and frequent critic of Mr. Trump, but he named her to the United Nations job weeks after his election. As ambassador, Ms. Haley has been an outspoken and often forceful envoy — someone whom foreign diplomats looked to for guidance from an administration known for haphazard and inconsistent policy positions — who emerged as something of a star amid the dysfunction of the president’s first national security team.

“It was a blessing to go into the U.N. with body armor every day and defend America,” Ms. Haley, seated next to Mr. Trump in the Oval Office, told reporters. “I’ll never truly step aside from fighting for our country. But I will tell you that I think it’s time.”

White House staff members were caught off guard by the announcement, which Ms. Haley and Mr. Trump had kept closely under wraps. But the president said Ms. Haley had informed him roughly six months ago that she wanted to take a break by the time his administration reached its second anniversary. He said that he hoped Ms. Haley would return in a different role, and that he would name her successor in the coming weeks.

“She’s done a fantastic job, and we’ve done a fantastic job together,” Mr. Trump said. “We’re all happy for you in one way, but we hate to lose you.”
Speaking to reporters on Air Force One as he flew to a rally in Iowa, Mr. Trump said he was considering a short list of five candidates to replace Ms. Haley, including Dina Powell, a former deputy national security adviser. Earlier he said that his daughter Ivanka Trump “would be incredible, but it doesn’t mean I’d pick her.”

Another possibility is Richard A. Grenell, the American ambassador to Germany, who served as a spokesman for John R. Bolton, the current national security adviser, when he was ambassador to the United Nations under President George W. Bush. Mr. Trump said he would consider Mr. Grenell but added, “I’d personally rather keep Ric where he is.”

Ms. Haley is said to have a strained relationship with Mr. Bolton, a longtime critic of the United Nations and a more dominant figure than his predecessor, Lt. Gen. H. R. McMaster. But she has been closely allied with Ms. Trump and her husband, Jared Kushner. The couple held a dinner in New York months ago celebrating Ms. Haley’s tenure there, and during her appearance with Mr. Trump on Tuesday, she singled them both out for praise.
“Jared is such a hidden genius that no one understands,” Ms. Haley said. “And Ivanka has been just a great friend, and they do a lot of things behind the scenes that I wish more people knew about, because we’re a better country because they’re in this administration.”

People close to Ms. Haley insisted there was nothing behind her decision other than fatigue after nearly two years in a rigorous job. She also wanted to make her decision known before the midterms to avoid the potential for an embarrassing departure if the vote were to go against the president………………