A CHORD VANISHING INTO ETERNITY: THE 8 BEST CLASSICAL MUSIC MOMENTS THIS WEEK.

In addition to reviews, features and news published during the week, our critics and reporters collect the best of what they’ve been hearing: the notes that sent shivers down their spines, the memorable voices, the set changes that left them breathless, the quotations that cut to the heart of the story. 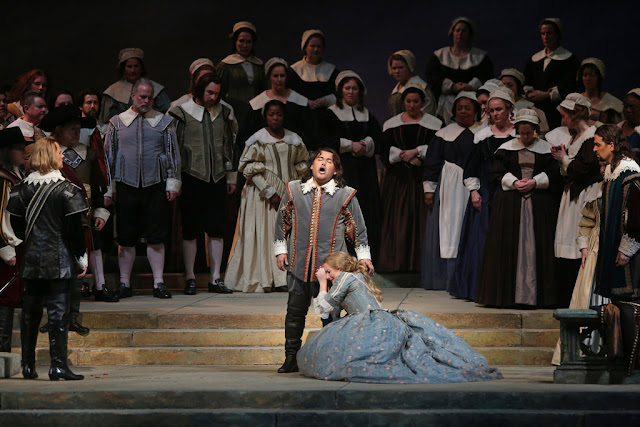 ‘I PURITANI,’ FEB. 10
Heckler at the Opera House
An obnoxious moment during the premiere of the Metropolitan Opera’s revival of Bellini’s “I Puritani” came at the conclusion of the stirring final ensemble: a rude bel canto buff indignantly shouting “No high F!” at the great tenor Javier Camarena. As written in the score, the tenor’s line indeed lifts to a near-impossible high F, probably sung quasi-falsetto in Bellini’s day. Like most tenors, Mr. Camarena, tweaking the phrase, dispatched a high D flat that was glorious enough for me — and for (almost everyone in) the audience, which cheered him wildly. ANTHONY TOMMASINI

NEW YORK PHILHARMONIC, FEB. 15
An Ethereal Mahlerian Peak
Right from the start, Mahler’s First Symphony offers potentially transcendent moments ripe for the plucking, none more so than Mahler’s ethereal quotation of his own art song, nostalgically meditating on a linden tree, that punctuates the third-movement funeral march. The Philharmonic’s excellent performance of the work at David Geffen Hall, led with temperament and passion by Manfred Honeck, peaked in that passage, with muted strings laying down an exquisite carpet for the song of the oboist, Liang Wang. (The program repeats on Saturday.) JAMES R. OESTREICH

We reviewed Mr. Honeck’s recent concerts with the Philharmonic, including a performance of Ravi Shankar’s concerto “Raga-Mala” (“Garland of Ragas”) and a program of Richard Strauss’s Oboe Concerto and Beethoven’s “Pastoral” Symphony.

THE BRENTANO QUARTET, FEB. 15
Britten Asks a Question
Benjamin Britten’s Third String Quartet, completed in 1975 during his final illness, ends not with an autumnal reflection but with a childlike question. At least that’s the way it came through in the Brentano’s rapturous performance, the first of three programs devised by the pianist Jonathan Biss exploring composers’ late styles. During this transfixing moment, a passacaglia theme trailed off amid gentle pizzicatos; then the music settled into a questioning final chord. Britten seemed to be asking,“What now?” ANTHONY TOMMASINI

ORCHESTRA OF ST. LUKE’S, FEB. 16
Mourning and Consolation
It must have been just the striking effect that Pablo Heras-Casado was going for when he programmed Lutoslawski’s “Musique Funèbre” to open the St. Luke’s concert at Carnegie Hall, leading into Brahms’s “A German Requiem” without interruption. Lutoslawski’s densely dissonant funereal music dissipated into isolated notes on a lone cello, which were then subsumed in the enveloping warmth of Brahms’s consolatory opening. JAMES R. OESTREICH

METROPOLITAN OPERA, FEB. 15
‘Blunder’ at the Met
“It sort of undoes, I guess, one of the blunders of my tenure,” Peter Gelb, the Met’s general manager, told me in an interview while describing the more traditional new “Tosca” production coming to the company next season. “Tosca” battles have raged since Mr. Gelb replaced the Met’s opulent 1985 Franco Zeffirelli production with a darker one by Luc Bondy in 2009. This is a skirmish in a larger war pitting fans of traditional stagings against those who crave modern reinterpretations. At stake: how opera can reach new audiences without antagonizing old ones. MICHAEL COOPER

IGOR LEVIT, FEB. 10
A Terrifying Transition
Beethoven’s “Diabelli” Variations end with a fugue, then a minuet. In between: a series of chords, each left to resonate a bit in space, charting the journey from the aggressive high spirits of the fugue to the courtly minuet. While he is poised in this moment on his recording of the work, Mr. Levit played it live in Zankel Hall with far more mystery and a hint of despair. The chords didn’t resonate so much as vanish, one after the other, into eternity, an effect somehow simultaneously consoling and utterly terrifying. ZACHARY WOOLFE

Read our review of Mr. Levit’s recital. Then delve into his favorite page from Beethoven’s “Diabelli” Variations.

IL POMO D’ORO, FEB. 14
Venetian Faintness
Hushed violins and teardrop-like notes from an archlute evoked the “reign of tears” into which Eurydice has been thrust in Antonio Sarto’s “L’Orfeo,” one of several Venetian rarities from which the splendid period-instrument ensemble Il Pomo d’Oro presented love scenes for a Valentine’s Day program at Zankel Hall. For one moment, the voice of the soprano Emoke Barath, normally plush and warm, turned weak-kneed and faint — a reflection of the artful dimming of tone that the mezzo Giuseppina Bridelli, as Orpheus, had used to color her character’s descent into the underworld. CORINNA da FONSECA-WOLLHEIM

IGUDESMAN & JOO, POSTED FEB. 14
Cloning a Star Pianist
“You have the Lang Lang setting,” Aleksey Igudesman declares, flipping an invisible switch on the back of the “Chinese pianist clone” he has pulled out of a cardboard box in a new sketch posted this week on the comedy duo Igudesman & Joo’s YouTube channel. The clone looks uncannily like the star pianist Yuja Wang and, after some fiddling with its control panel, plays like her, too, but on the Lang Lang setting, “it” delivers a few bars of Chopin deliciously heavy on rubato and ceiling-gazing demonstrations of ecstasy. CORINNA da FONSECA-WOLLHEIM