THE JEAN-MICHEL BASQUIAT YOU HAVEN’T SEEN

Basquiat Before He Was Famous
Just in time for Valentine’s Day, a new exhibition on Jean-Michel Basquiat is a love letter of sorts — to the artist from a former girlfriend, and to a downtown New York art scene now long gone.
“Basquiat Before Basquiat: East 12th Street, 1979-1980,” at the Museum of Contemporary Art in Denver, is the first museum show to focus on the work and life of the artist in the brief time he lived with Alexis Adler in a sixth-floor walk-up in the East Village of Manhattan. It was a period that the exhibition posits as a seminal year of multifaceted creative exploration in the artist’s life, before painting took precedence. 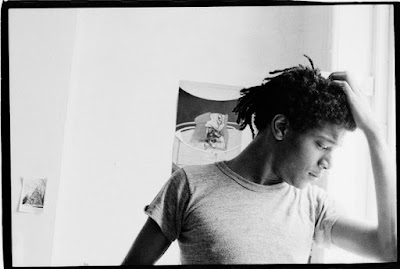 Jean-Michel Basquiat in a photograph from “Basquiat Before Basquiat: East 12th Street, 1979-1980,” at the Museum of Contemporary Art Denver. Credit Alexis Adler

“Basquiat’s time with Alexis was an important transitional moment because he was still exploring many creative outlets with equal passion, including playing music, performance, drawing and writing,” said Nora Abrams, the show’s curator.
Ms. Adler, 60, saved more than 100 photos, art objects and ephemera from the era. “Our apartment overflowed with art and love,” she recalled on a wintry New York day, in the homey kitchen of the place they once shared. Among the treasures is a sculpture Basquiat made of the carapace of an old radiator he found on the street. In one of her more personal photos, he practices clarinet on the edge of the bathtub in their 400-square-foot squat. 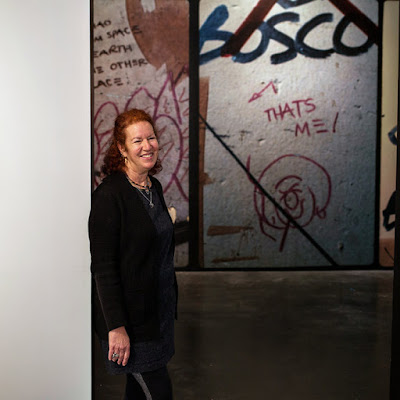 Alexis Adler, at the Museum of Contemporary Art Denver, which features a replica of her apartment building’s Basquiat graffiti, circa 1979. She still lives in the 400-square-foot East Village apartment she shared with Basquiat, though the graffiti has long been painted over. Credit Nick Cote for The New York Times

“We were punk pioneers homesteading in this ever-evolving remnant of the neighborhood,” she writes in the exhibition catalog. “Art blossomed by feeding off the lawless decay.”
Ms. Adler, now an embryologist in a fertility lab, was “a Barnard biology grad with a strong hippie streak” in 1979, when she met a 19-year-old Basquiat. He was four years her junior, and she and her friends in the club scene had been admiring his street graffiti and SAMO© tag all over downtown. Soon, the two moved into a warren of four tiny rooms on East 12th Street. During the months they lived together, while Ms. Adler worked in a lab at Rockefeller University, he transformed the floors, walls, doors and furniture into raw materials for his creative explorations. In his sketches on view in Denver, he has copied diagrams of chemical compounds he borrowed from Ms. Adler’s science textbooks……