THE JAPANESE HOUSE: ARCHITECTURE AND LIFE AFTER 1945. BARBICAN CENTER

The Japanese House: Architecture and Life after 1945 is the first major UK exhibition to focus on Japanese domestic architecture from the end of the Second World War to now, a field which has consistently produced some of the most influential and extraordinary examples of modern and contemporary design. 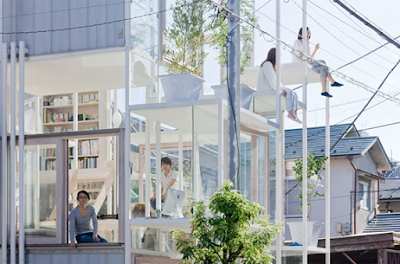 In the wake of the war, the widespread devastation of Tokyo and other cities in Japan brought an urgent need for new housing, and the single family house quickly became the foremost site for architectural experimentation and debate. In the years following, Japanese architects have consistently used their designs to propose radical critiques of society and innovative solutions to changing lifestyles. Considering developments in residential architecture in the light of important shifts in the Japanese economy, urban landscape, and family structure, The Japanese House presents some of the most exciting architectural projects of the last 70 years, many of which have never before been exhibited in the UK. As well as architectural projects, the exhibition incorporates cinema, photography and art in order to cast new light on the role of the house in Japanese culture.
The Japanese House: Architecture and Life after 1945 is curated by Florence Ostende (Barbican Centre, London), in collaboration with Pippo Ciorra (MAXXI, National Museum of the 21st Century Arts, Rome). The Chief Advisor is Yoshiharu Tsukamoto (Atelier Bow-Wow/Tokyo Institute of Technology). The Academic Advisor is Hiroyasu Fujioka (Professor Emeritus, Tokyo Institute of Technology). The exhibition designer is Lucy Styles. The Fujimori tea-house is designed by Terunobu Fujimori in collaboration with architect Takeshi Hayatsu and built by students from Kingston University.
The exhibition is co-organised by the Japan Foundation and the Barbican Centre and co-produced by the Japan Foundation, the Barbican Centre, MAXXI National Museum of the 21st Century Arts, Rome and MOMAT National Museum of Modern Art, Tokyo. The project was initially conceived in Tokyo by Kenjiro Hosaka (MOMAT) and Yoshiharu Tsukamoto.