The stunning Napoleon Diamond Necklace was commissioned by Napoleon I of France c. 1811-1812.  It consists of 28 mine cut diamonds set into a single thread, with a fringe of alternating pendeloque and briolette diamond cuts.


Each briolette mounting is set with 12 rose cut diamonds. 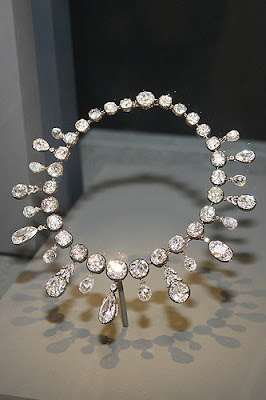 The Napoleon Diamond Necklace on display at the Smithsonian Institution in Washington, D.C. Photo Credit


In 1810, two months after his divorce from the Empress Josephine, Napoleon married the Archduchess Marie Louise of Austria. Within a year, she gave birth to a son, Napoleon II.
In June 1811, to celebrate this occasion, Napoleon commissioned the Napoleon Diamond Necklace from the Parisian jewelry firm Nitot et Fils, at a cost of 376, 274 French francs. 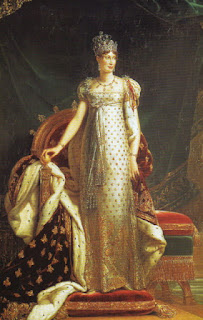 
In 1815, when Napoleon was exiled to Saint Helena, Marie Louise returned to Austria with the necklace and owned it until her death.
There are several portraits of Marie Louise wearing the diamond necklace including few by the artists Francois Gerard and Giovan Battista Borghesi.
The Napoleon Diamond Necklace has an illustrious past.  After the death of Marie Louise in 1847, the necklace passed to Archduchess Sophie of Austria.
After Sophie’s death the necklace passed to Maria Theresa of Portugal, the third wife of Karl Ludwig, one of Sophie’s sons.
In 1929, Maria Theresa sent the necklace to the United States with a purchasing price of $450, 000. The necklace was sold to David Michel in New York City for $60, 000 by the jewelers Harry Winston and Harry Berenson.

When Marie Theresa found out about the sale, she took the matter to court and recovered the necklace. After this incident, she held the necklace until her death in 1944.
After her death, the necklace was sold to Paul-Louis Weiller.  Weiller sold it to Harry Winston who kept it intact and resold it the same year to Marjorie Merriweather Post.
Another great story from us: Napoleon built a fort in the Atlantic Ocean only for it to be used for a game show in the 90s
In 1962, the Marjorie Merriweather Post donated the necklace to the Smithsonian Institution in Washington D. C. and it since remained on display at the National Museum of Natural History.