For the first time in Russia the State Hermitage Museum presents the exhibition of Mariano Fortuny - the great designer of the 20th century, celebrated by his contemporaries as “The Magician of Venice.”
Though his heritage has never been exhibited in Russia, the name of Fortuny is widely known here due to two generations of this family.
Mariano Fortuny y Madrazo (1871, Granada - 1949, Venice) - artist, designer, engineer and photographer, one of the great designers of the first half of the 20th century, who has changed fashion and interior design. Son of the famous Spanish artist Mariano Fortuny y Marsal he inherited from his father not only his artistic talent, but also a passion for the art history studying. His heritage overwhelms by its volume, it is hard to believe that a person could create all this in  the course of a lifetime. It seems that he had little interest in anything beyond his work and creativity. 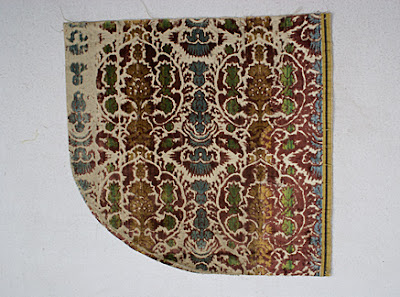 One of the most important masterpieces from the Hermitage collection bears a name of "Fortuny Vase". This Alhambra Hispano-Moresque vase gilded with luster, dating from the second half of the XIV century, is considered one of the best in the world. It was acquired by the Imperial Hermitage Museum in 1885 as a part of the collection of the Parisian antiquary Basilevsky who in his turn purchased it from the Fortuny family. The origin of the vase was so significant, that it came down to us in its name.


The Fortuny exhibition in the Hermitage is a joint project of the Hermitage and the Fondazione Musei Civici di Venezia lending on this occasion more than 150 works of art, whose works mainly come from the Fortuny Museum, the house and atelier of the genial artist in the Palazzo Pesaro degli Orfei in Venice: one of the twelve Venetian Civic Museums.


Besides the museum's objects, the exhibition will  present pieces from private collections of Venice and Russia. Still produced in Venice using the innovator’s designs and techniques, Fortuny fabrics will also form of the exhibition, and thus demonstrate the continuity of technologies and creative techniques of Mariano Fortuny. The exhibition will show the fabrics, costumes as well as their designs, Fortuny's theatrical works and a small part of his historical collection,  this latter owned by Fondazione Venezia and preserved at the Civic Museums of Venice in Mocenigo Palace. Works of Mariano Fortuny will be accompanied by the Hermitage objects to create a historical background and to show the source of the artist's inspiration. The exhibition will feature Italian medieval and Renaissance fabrics, Coptic fabrics, antique sculptures and oriental ceramics from the Hermitage collections.

The event  in patronized by Hermitage Italia -  that since 2014 has its seat in Venice according to an Agreement between the City of Venice and the Hermitage Museum - and  sees  the collaboration  of  Villaggio Globale International.
Curators of the exhibition - Tatyana Lekhovich, senior researcher of the Department of the Western European Applied Art of the State Hermitage, Ph.D., in collaboration with Daniela Ferretti and Chiara Squarcina.
The exhibition is supported by Lavazza, the Italian Institute of culture is St. Petersburg and the representative office of Fortuny in Russia. Fortuny Inc. donated fabrics for the exhibition design.