Japan's biggest film is a kooky, cross-cultural time-travel yarn. What does it say about the country's hugely influential cinema? 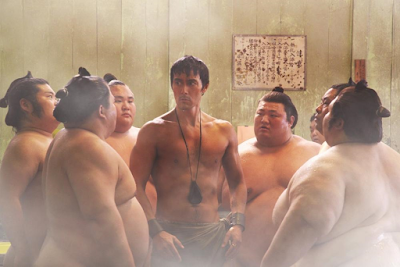 Viewed from nine time zones away, Japan's current No 1 film, Thermae Romae, seems to be yet another example of the scintillating oddities of the like only that country produces. Adapted from Mari Yamazaki's award-winning manga, it's about a browbeaten architect in ancient Rome who finds an unexpected source of ideas: his local steam bath conceals a time tunnel that leads to a modern-day Japanese bathhouse. He greets the scrawny patrons as "flat-faced slaves" – then the film sets out to ask what 21st-century society could ever do for this Roman. Well, fruit-flavoured milk and vibrating tummy toners, for starters.


The film looks great. And, propelled by the country's undying obsession with outsiders, it's gone like the clappers at the Japanese box office, having become the top-grossing release of the year so far. But beyond the Nippon-curio value, Thermae Romae is just the latest instalment in a millennium-long exchange programme between east and west – from 14th-century Yuan-dynasty porcelain to Akira Kurosawa's love affair with John Ford to Hello Kitty. This one is definitely on the kooky end of the scale, with lead actor Hiroshi Abe doing what no western actor could pull off without flashbacks to Mickey Rooney-esque racelifting: he plays Lucius, the fish-out-of-water architect, with a stable of "strong-faced" Japanese actors tackling other Romans, including Emperor Hadrian. Mark Schilling, writing in the Japan Times, points out that, far from being crass: "This sharpens the film's comic slant (though Abe and company do not play the Romans as cartoons), as well as underlining its we-are-all-brothers-in-the-bath message."


Lucius is inspired by the Mount Fuji murals in Tokyo bathhouses to paint the similarly graceful curves of Mount Vesuvius on the walls back home. But what Thermae Romae – unlikely to get a release in the UK – inadvertently shows up is how little cinematic influence Japan has over the west at the moment. All of the talk is of how Chinese money is going to start to exert gravitational pull over Hollywood. It feels like quite a while since Japan had a similar sway on the mainstream fluxus: another release from the last couple of weeks, Sadako 3D – a comeback for the lank-haired hauntress from Ringu – reminds us it's been nearly 10 years since J-horror reconfigured the genre around the world. That surge of chill, ambient terror came to an abrupt end in a wave of cash-in English-language remakes in the mid-noughties.
A decade before, it was anime's radical visual frontier, led by Akira, that drew in westerners. Its influence has arguably been even longer-ranging than J-horror's, from the shot of adrenalin it gave Hollywood action film-makers such as the Wachowski brothers and Quentin Tarantino, through to the continued presence of Studio Ghibli and Hayao Mizayaki as global ambassadors for Japanese film creativity.
But they're virtually the only ones at that high level now: Takeshi Kitano seems to be a fading force; Hideo Nakata (Ringu; Dark Water) and Takashi Shimizu (The Grudge) have failed, like many Japanese directors before them, to break into Hollywood. Strangely, it's Takashi Miike (Audition; 13 Assassins), whose output once looked too erratic and idiosyncratic, who seems to have emerged as the live-action Japanese film-maker with the widest following abroad. (And, interestingly, he's the one who's kept the most distance from Hollywood.) There are precious few other high-status figures outside of the festival circuit, which is puzzling for a large nation with such a glittering history of stylish mavericks.


Japan doesn't seem that phased by its lack of clout. Inside its borders, it's getting on perfectly fine: it's still (just) the second-largest film market in the world, buoyed by the teeming V-cinema circuit. The industry is in a far healthier state in the early 90s, when its own studio system, undermined by VHS and US imports, was teetering on the brink. It produces about 400-plus features a year now, well up from 270 in 1999, putting it third or fourth in the cinema-producing stakes (depending on whether you believe Chinese figures about their film output); it has a decent 54% share of its own box office. No reasons for panic, in other words – and profits have recovered after last year's post-tsunami slump.


But I miss that injection of Japanese cool, the anticipation that the next big arrival might scramble your cinematic vocabulary. It gave me my first taste of how liberating foreign cinema could be – precisely because it was often so otherworldly. Weirdly, it was a western film about the country – Gaspar Noé's Enter the Void – that last took me to that place. Perhaps it's a matter of waiting for the country's film-makers to recharge their creative energy. Perhaps the east-west influence works in cycles that require both parties to be synchronised in the right places, to give and to accept.


• Next week's After Hollywood will look at some of the non-American faces who are starting to crop up in globalised blockbusters. Meanwhile, what global box-office stories would you like to see in covered in the column? Let us know in the comments below.