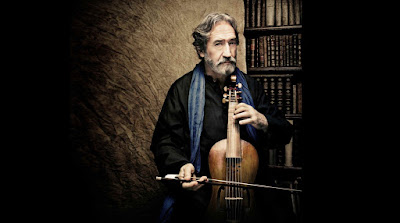 Sweeping over a thousand years of complex and culturally rich history, Jordi Savall and his performers offered an enthralling and magisterial act of musical imagination at the Library of Congress on Saturday. (Molina Visual)

Near the end of a triumphant concert Saturday, Catalan early-music legend Jordi Savall boasted that the singers and instrumentalists on the overflowing stage at the Library of Congress hailed from 40 countries. This multinational cast was only fitting for Savall’s ambitious program: a musical tour d’horizon of the Republic of Venice, whose influence stretched throughout the Mediterranean world.
Sweeping over a thousand years of complex and culturally rich history, the evening was an enthralling and magisterial act of musical imagination.
As a conductor and viola da gamba player, Savall has specialized in music from the Middle Ages to the Baroque era, a period that coincides with the life of this city-state, which was also known as the Most Serene Republic of Venice.
The thrill of a Savall concert is always a sense of discovery, and over the course of two-dozen short pieces, Savall and his three magnificent ensembles and his guest artists created a transportive narrative out of unfamiliar music. The performances, deeply informed by scholarship but always fresh, had all of Savall’s hallmarks: richness of color, rhythmic proportion and a joyous sense of spontaneity.
Part of the evening was devoted to spotlighting the far-flung reaches of Venetian influence. The Armenian duduk, a woodwind flute, had a hauntingly antique lyricism in Haig Sarikouyoumdjian’s improvisations. Hakan Güngör offered his own extravagant improvisations on the kanun, a Turkish zither, as an introduction to a tongue-in-cheek arrangement of Mozart’s “Turkish Rondo” for the larger ensemble.


Yet the concert was no facile showcase of “world music.” Rather, it was a tightly woven narrative, with the music performed mostly without pause. The evening had a sense of unfolding drama, as we witnessed the birth of Venice and the waxing and waning of Orthodox influence through interludes sung with devotional authenticity by the Orthodox-Byzantine Vocal Ensemble from Greece.
Savall did not shy away from the more problematic aspects of history, including the crusading ideology of troubadour Macabru’s “Pax! In nomine Domini.” The evening’s high point came in a riveting performance of Monteverdi’s “Il Combattimento di Tancredi e Clorinda,” a dramatic madrigal about a battle between a Christian knight and a Muslim soldier. Baritone Furio Zanasi offered spellbinding narration, evoking the story’s heroism, tragedy and redemption through conversión.
The Italian republic disbanded after surrendering to Napoleon in 1797. Yet Savall’s narrative did not end in defeatism but instead culminated in Luigi Bordèse’s much later setting of an anti-Napoleonic text to Beethoven. As the triumphant finale of Beethoven’s Fifth Symphony provided the backdrop for a cry for liberation, it became clear that Savall sought to subsume the story of Venice into the larger history of Europe.
Savall alluded to the modern European project, now increasingly under threat, by introducing the encore — a moving medley capped by a devotional work by Arvo Pärt — as “a prayer for peace and dialogue and solidarity.” Savall’s sentiments were undeniably beautiful and noble. But it was the evening’s larger narrative — a history of a republic, benefiting from free trade but often embarking on overseas crusades — that offered the deeper and more troubling food for thought.