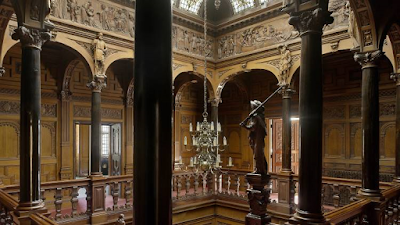 Few people seem to have heard of Two Temple Place – an extraordinary former private dwelling tucked away off the Strand – although it has the distinction of being one of the first houses in London ever to have a telephone. Built in the late nineteenth century by fabulously wealthy American William Waldorf Astor, it has been owned since 1999 by arts charity the Bulldog Trust and mostly earns its keep as an opulent party venue. The building juxtaposes literary reference, high romance and superb craftsmanship in a gloriously bonkers way. Flanking the entrance are a couple of cherubs, one of which appears to be chatting on the phone. Inside, the imposing rooms play host to many statues of literary figures, among them Rip Van Winkle and a large cast of Shakespearean characters. Best of all is a sculptural gathering in the Great Hall of historical figures including Mary Queen of Scots, Anne Boleyn and Pocahontas, who are linked only by the fact that each loved, or was loved, deeply. How can you resist?


Two Temple Place is open as part of Open House London, held in September, for occasional tours throughout the year and for its annual winter exhibition.