Over the past three weeks, our critics fanned out over “La Serenissima,” Carnegie Hall’s magisterial dive into the music of the Venetian Republic. The festival, which ended on Tuesday with a semi-staged performance of Monteverdi’s 1643 masterpiece, “L’Incoronazione di Poppea,” included events at both Carnegie and elsewhere in the city; vocal concerts and strictly instrumental oHnes; sonatas and laments. Over all, a rare bounty. Here are a few of our impressions. 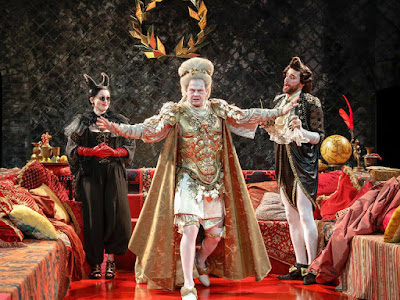 My three encounters with “La Serenissima” felt like skipping across a couple of centuries of history. Appearing on Feb. 12 at Zankel Hall with members of his ensemble Hespèrion XXI, the early-music magus Jordi Savall presided over a sprightly, feather-light program that located the roots of Venice’s sounds — later to emerge, thanks to trading routes, across Europe — in earthy, anonymous dances from the early 16th century. Mr. Savall’s aim was to chart some of those international paths of influence, and also to showcase the development of the first instrumental music composed fully independent of dance or vocal precursors.

That closing performance of “L’Incoronazione di Poppea,” on Feb. 21, propelled me to the middle of the 17th century. The instrumental textures of this score are still austere — Rinaldo Alessandrini, the conductor and director of the ensemble Concerto Italiano, has rejected interventions that beef up the opera’s orchestration — but the range of feeling has grown, encompassing a sweep from solemnity to bawdiness. Against Mr. Alessandrini’s intentionally minimal background, the action took on the quality of a stage play: Declamatory vividness was as important as beauty of tone. I’m thinking especially of the contralto Sara Mingardo, too little known in this country, whose voice is like soft, moist, dark earth and whose dignity and tenderness made Ottone’s melancholy magnetic.
The shift from “Poppea” (1643) to Vivaldi’s “Juditha Triumphans” (1712, performed on Feb. 7 by Andrea Marcon and the Venice Baroque Orchestra) is a little like that from black-and-white to Technicolor. Vivaldi’s orchestra is comparatively huge and varied — four theorbos! proto-clarinet-ish chalumeaux! — and deployed in ways that may lack Monteverdi’s emotional sophistication but allow for kaleidoscopic effects and more modern verve. The vocalism is here more athletically florid than declamatory, little problem for the fiery mezzo Ann Hallenberg, like Ms. Mingardo unaccountably obscure in America, and her cast mates.

As my colleague Corinna da Fonseca-Wollheim wrote as the festival began, it was impossible to avoid the whiff of politics throughout “La Serenissima.” Trade and internationalism made Venice’s economic success and culture possible; one of the greatest of all operatic depictions of power, “Poppea” makes us meditate, as the scholar Ellen Rosand has written, on “its extraordinary glorification of lust and ambition at the expense of reason and morality.” These dips into Baroque Venice were delightful, but they were no escape from our time. ZACHARY WOOLFE

It is salutary, while hearing the gorgeous, seductive strains of Monteverdi’s “L’Incoronazione di Poppea,” to try to conjure the actual personages and circumstances of the place and time represented in this historical confection: Rome at the dawning of the Christian millenniums. Three years after the events of the final scene, which gloriously depicts Poppea’s coronation and marriage to Nero in A.D. 62, Nero kicked Poppea in the stomach in a fit of rage, killing her.

“Poppea” was performed by Concerto Italiano on Tuesday. In the weeks before, the festival threw another beautiful if unflattering light on the same historical period, Handel’s early opera “Agrippina,” presented, both in concert and in an overwrought staged production, by forces of the Juilliard School.

“Agrippina” takes the story back some years, to Nero’s first marriage — in A.D. 53, to Emperor Claudius’s daughter Octavia, at the age of 17 — and his ascension to the imperial throne on Claudius’s death the next year. Here the cynicism and ugly politicking are impossible to ignore even for a moment, as Agrippina, wife of Claudius and mother of Nero, plots to place her son (Claudius’s stepson) on the throne, while much of male Rome, it seems, including Claudius, tries to bed Poppea.

The “Poppea” performance, with Rinaldo Alessandrini leading his little band of period instrumentalists and an excellent cast of singers led by Miah Persson and Sara Mingardo, was a fitting conclusion to a festival that must surely be counted a success in musical terms. It seems also to have consistently drawn sizable audiences, though “Poppea,” with its decidedly minimal staging touches, lost many listeners after intermission. Ah, but what they missed at the end! JAMES R. OESTREICH

Midway through its concert of love scenes from Venetian opera on Feb. 14, the period-instrument ensemble Il Pomo d’Oro performed an instrumental sonata by the 17th-century composer Dario Castello. On one note the first violinist enacted a sort of extravagant, slowed-down vibrato that resulted in a quarter-tone wobble. The gesture injected a hint of Middle Eastern flavor into the music, momentarily troubling the early-Baroque harmonies in a way that was both beautiful and alienating.

Three days later, sitting in the same seat at Zankel Hall for the Ahmet Erdogdular Classical Turkish Music Ensemble, I felt a jolt of déjà vu during an improvised kamancheh solo in a Sufi hymn. The bowed, almond-shaped kamancheh looks a bit like a violin, but is held upright on the player’s knee and produces a sandier, more veiled sound that can be uncannily like a female voice, husky with grief. That vocal quality came through strongly in Derya Turkan’s soulful improvisation — which included the same languid oscillation of pitch that had struck me as so oddly expressive in the Pomo d’Oro concert.

There were no program notes at either event belaboring the point that Venice owed much of its cultural riches to its deep engagement with the Ottoman Empire. But by presenting both excellent ensembles side by side as part of its festival, Carnegie Hall subtly orchestrated this virtual handshake across cultures, genres and time. CORINNA da FONSECA-WOLLHEIM