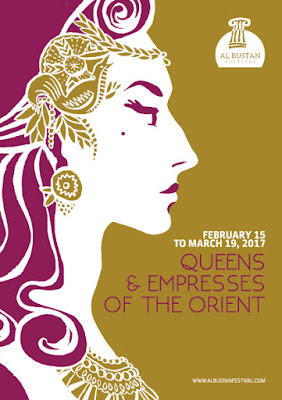 The Morphing Quartet won the first prize at the prestigious Chamber Music Competition in Osaka in 2011. The French-Lebanese saxophonist Anthony Malkoun is a member of the quartet. The brilliant saxophonists are in Lebanon for the first time.
SCHEHERAZADE
Victor Julien-Laferrière, cello, Al Bustan Festival Orchestra, Gianluca Marcianὸ, conductor
Saturday, 18 February at 20:30

Five musicians, principals of the Brandenburg Symphony, have put together an unusual ensemble as a result of a desire to experiment with new sounds. Through its music, the Jacaranda Ensemble builds a bridge between the cultures of the world. The positive response of the public as well as international respect has confirmed the unusual concept of the Jacaranda Ensemble.
20-feb-anna-bonitatibus
SEMIRAMIS
Anna Bonitatibus, mezzo-soprano, Marco Marzocchi, piano, six musicians from Al Bustan Festival Orchestra
A concert dedicated to the legendary Semiramis, wife of the Biblical Nimrod, Queen of the Assyrian Empire (reigned 811-806 BCE). The majority of the pieces in the program were unknown in modern times before being unearthed by Anna Bonitatibus, a few years ago. About this concert at Wigmore Hall: “Altogether an exhilarating evening of rarities and novelty, sung with full blooded rigor” Bachtrack.
21-feb-nasser-el-taee
FESTIVAL LECTURE
Dr. Nasser el Taee
Venue: Bathish Auditorium - A.U.B

The Stabat Mater describes the suffering of Mary, mother of Jesus, as her son is crucified. Rossini’s Stabat Mater combines two entirely different styles of composition: traditional church music in the Renaissance manner of Palestrina and Pergolesi, and arias that would not sound out of place in a typical Rossini opera. It was described as “noble, simple and severe.”

Medea is an Opera that is rarely performed. It has been said that it requires a soprano with vocal cords of amalgamated steel to sing the title role of MEDEA and Svetla Vassileva has it.
Italian Cultural InstituteAssociation PHILIPPE JABRE
RACHMANINOV AND ELGAR CONCERTOS
Renaud Capuçon, violin, Khatia Buniatishvili, piano, Al Bustan Festival Orchestra, Gianluca Marcianὸ, conductor
Wednesday, 1 March at 20:30

It is Martha Argerich who played musical matchmaker and brought these two brilliant performers together. Their concerts at Lugano Festival in 2012 were a resounding success. Renaud has been praised for his “intensely lyrical” tone and “gloriously rich sound” (BBC Music Magazine). Khatia was described as the “fiery young star” and hailed by Argerich as “a young pianist of extraordinary talent.”

Khatia and I met over Franck’s sonata,” Capuçon recalls. “This is the sonata that sealed our musical partnership, the sheer joy of playing together.”
GloriaCampaner
ONLY BEETHOVEN 3
Gloria Campaner, piano, Al Bustan Festival Orchestra, Beatrice Venezi, conductor
Saturday, 4 March at 20:30

Who else but Gloria Campaner to play the Piano Concerto No. 3? The” Eroica” Symphony, also No. 3, is one of the major milestones in the development of Beethoven’s style trademark.

A fusion of classical piano with live electronic music. A journey through techno, dub, dance music and improvisation, bringing classics from the past into a new light. Produced by Caecus Animi and Gloria Campaner
julia-domna
JULIA DOMNA - Theatre in Arabic
Mireille Maalouf (as Julia Domna) Serena Chami (as the servant) Director: Cherif Khaznadar
Monday, 6 March at 20:30

Julia Domna ( about 170-217) born in Emesa, today's Homs in Syria, daughter of the High Priest Bassianus. She got married to Emperor Septimius Severus. Together they ruled a huge empire at the turn of the second and third centuries ( 193- 211) She was the mother of Emperors Caracalla and Geta and was famous for her quick learning as well as her extraordinary political influence. After the murder of her son Emperor Caracalla, she chose to commit suicide in 217.

Together with the acclaimed soprano Regula Mühlemann, La Folia Barockorchester explores the historical figure of Cleopatra through the different interpretations of Baroque composers. Besides famous arias by George Frideric Handel and Johann Adolf Hasse, the program also reveals pieces by Alessandro Scarlatti and Antonio Vivaldi.

Queen of Sheba is a biblical figure 967 B.C.E.. Her legendary voyage to meet Solomon, King of Israel, has inspired centuries of speculation about her kingdom and influence in the ancient world. “Pálfalvi sets new standards for trumpet playing” MDR Figaro, 2015

Mozart’s Sinfonia Concertante for Violin and Viola can be considered his most successful realization in this cross-over genre between symphony and concerto. It happens that the name of the two Russian female soloists is doubled as well.

Berlioz's La Mort de Cléopâtre is a deeply admired work that has been taken up by some of the most important mezzo singers of our time. It is the perfect way to bring the Festival to an end.