Burhan Ozbilici’s photograph is intense and haunting. Shot in the seconds following the assassination of Andrey Karlov, Russia's ambassador to Turkey, it shows the gunman, Mevlüt Mert Altıntaş, standing next to the lifeless body, with one hand pointing to the sky and the other still holding the gun. On his face, we can read his fury and determination, making Ozbilici’s photograph one of the most intense images of 2016.


The photograph, which has been equally celebrated for its importance and denounced for its raw depiction of a man’s fanaticism , led the news last December and will continue to do so in the weeks to come after a jury of professional photographers and editors selected it as the World Press Photo of the Year, a prestigious photojournalism award. 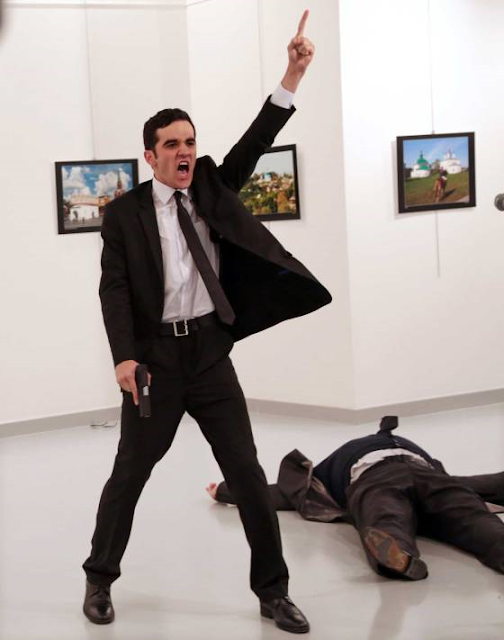 The jury, which convened in Amsterdam in early February, was, however, cripplingly split, TIME has learnt, with the photograph receiving a simple majority of 5-4, several people familiar with the judging, who asked not to be named, confirm.


“It was a very close thing,” says Magnum photographer Stuart Franklin, the chair of this year’s jury. “I didn’t think, if I’m honest with you, that it should be World Press Photo of the Year, but look, I’m just one of the jurors… The majority vote was that it should be the picture.”


The decision was a hard one to make, but one that she agrees with, says photographer Tanya Habjouqa, one of the nine members of the jury. "The World Press Photo of the Year holds mystery," she tells TIME. "It is a photo that despite being spot news – a raw, in-the-moment, truth – it also begs questions about the [killer's] motivations. Questions that may never be answered." Plus, she says, details about the image jolted her. "The poor state of the assassinated Russian ambassador's shoes along with the flung glasses in the corner. I had never noticed that before."


For photographer Mary F. Calvert, another member of the jury, there’s no doubt Ozbilici’s photograph deserved to win. “In the end, it was very apparent to us that the picture that won was the picture of the year,” she tells TIME. “It’s the consequential spot news picture that very few of us get an opportunity to experience in our lifetime as photojournalists. That picture was the shot heard around the world. I think there are very few people that didn’t see that picture.”


Ozbilici’s photograph, adds Calvert, draws its power from its universality. “The picture is indicative of the hate and desperation and frustration that’s so apparent in our society today,” she says. “It encompasses what’s happening in America, what’s happening with Russia, and what's happening in Syria. You can draw parallels with all kinds of similar events happening around the world.”


But more importantly, as Ozbilici tells TIME, it shows the important role photojournalists play today. “Journalism has been neglected in the last few years,” he says. “This picture proves that we need great journalism. I feel this prize gives me more responsibilities toward my colleagues. It gives me a voice to support great journalism.”


The judges recognized that commitment not only through their choice of the World Press Photo of the Year, but also in the 45 other prizes they bestowed, starting with Daniel Berehulak’s in-depth investigation of thousands of drug-related murders in the Philippines. Done for the New York Times, the photo essay won first prize in the General News Stories category. “I think that’s an exemplary piece of photojournalism,” says Franklin. “Not only did he photograph it well, but he also did a great job of mapping the homicides and writing a very compelling text.” 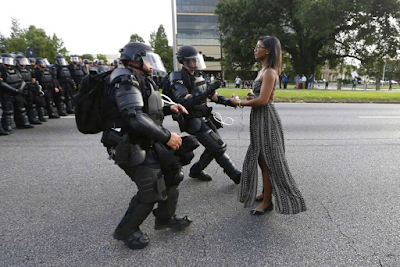 Lone activist Ieshia Evans stands her ground while offering her hands for arrest as she is charged by riot police during a pr...

The New York Times received another two awards with photographers Sergey Ponomarev and Tomas Munita in Iraq and Cuba respectively. “These photographers spent considerable time digging into important news and social issues that were among the biggest stories of the year,” says the Times’ international photo editor, David Furst. “We're thrilled and humbled by the recognition. It validates our commitment to in-depth photojournalism across the world, and the time and resources we invest to cover the biggest stories of the year."


Other winners include Jonathan Bachman’s iconic image of Ieshia Evans, a Baton Rouge protester who is seen facing two police officers in riot gear as she’s about to be arrested; Laurent Van der Stockt's heart-wrenching photograph of a terrorized Iraqi girl during the army's Mosul offensive; and Brent Stirton's searing images of the rapid destruction of the rhinoceros population, shot for National Geographic.


See the full list of winners in the news, people, sports and nature categories.