WHAT BAROQUE VENICE CAN TEACH US ABOUT MODERN POLITICS 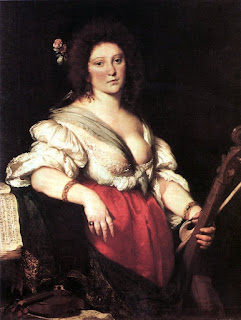 This painting by Bernardo Strozzi is believed to be of the composer Barbara Strozzi, who is the focus of “The Secret Lover: Women in 17th-Century Italy,” a program by the ensemble Tenet.


For New Yorkers seeking temporary respite from political Twitter storms, Carnegie Hall is usually a safe space. And its special festival “La Serenissima: Music and Arts from the Venetian Republic” may seem particularly appealing. With a sumptuous red-and-gold Carnival mask adorning the marketing materials, and a program promising liberal amounts of Vivaldi, the festival, which runs through Feb. 21 at Carnegie (and elsewhere), virtually guarantees escape.


But culture was never apolitical in Venice, a fiercely independent city sitting at a crossroads of civilization. In fact, the impressively diverse and broad offerings include events with acute contemporary resonance. Consider this your trigger warning.


Vivaldi’s only surviving oratorio, “Juditha triumphans” — which the Venice Baroque Orchestra performs on Tuesday — contains glorious music and a blood-soaked libretto lifted from the Old Testament. It was also written to commemorate (read: gloat over) Venice’s victory against the Ottoman Empire at the siege of Corfu in 1716. But unlike most of its Christian neighbors, the Venetian Republic maintained uninterrupted contacts with the Islamic Middle East and maintained trade links even in times of war.