BEST OF 2018: OUR TOP 20 EXHIBITIONS ACROSS THE UNITED STATES 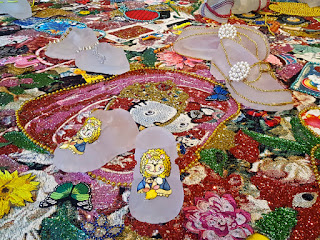 Art visualizing identity and community took center stage in our top 20 exhibitions across the United States for 2018.
Of 72 by Ebony Patterson (detail view) (image by Sarah Rose Sharp)
In 2018, artists and curators across the United States have been crafting brilliant exhibitions across the US, exploring themes of identity and community in innovative ways. Ebony G. Patterson made a maximalist tribute to victims of violence in her home country of Jamaica, while Joel Otterson crafted work recalling his parents’ professions as a seamstress and plumber. Indigenous artists took the stage at the Anchorage Museum’s Unsettled and Jeffrey Gibson’s This is the Day at the Wellin Museum. The enthralling official Obama portraits, painted by Kehinde Wiley and Amy Sherald, were revealed at the National Gallery in DC, putting Black fine artists into the national consciousness. This list is an insight into the tastes of our US writers and the shows that moved them.
1. Gordon Parks: The New Tide, Early Work 1940–1950 at the National Gallery of Art 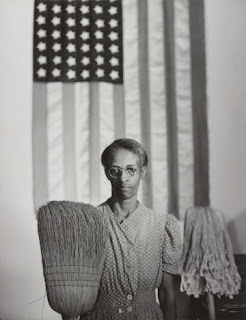 Gordon Parks taught millions of white Americans how to see Black people anew. Although he was as comfortable shooting fashion and celebrities as he was photographing the Black Panthers, his claim to greatness as a photographer rests on the Life magazine photo-essays that made him one of the mid-20th century’s foremost interpreters of African American culture and society. Gordon Parks: The New Tide, Early Work 1940–1950 explores new territory as it traces Parks’s emergence as an artist and documentarian of rare power and creativity. Parks made the earliest photographs in the exhibition while he was struggling to establish himself as a portrait and news photographer in St. Paul, Minnesota, and supporting his family primarily through his job as a railroad dining car porter. Only 10 years later, he was an accomplished — even visionary — professional photographer and a member of Life’s staff. It would have been an impressive accomplishment for anyone, but for an African American in a still-segregated society, it was astonishing. The 150 portraits and documentary photographs in The New Tide, curated by Philip Brookman, show how it happened. The critical years were 1940 to 1944, during which Parks absorbed much of the political and aesthetic radicalism of the Black Chicago Renaissance and the then-groundbreaking approach of the federal government’s Farm Security Administration/Office of War Information (FSA/OWI) documentary project. No photograph in the exhibition exemplifies this marriage between the concern for racial justice and the impulse to document better than his now iconic 1942 portrait of Ella Watson, a government housekeeper for whom the promises of American democracy were empty words. —John Edwin Mason

2. Jeffrey Gibson: This is the Day at the Wellin Museum

Installation view of Jeffrey Gibson: This Is the Day at the Ruth and Elmer Wellin Museum of Art at Hamilton College, Clinton, NY (image by Seph Rodney)
September 8–December 9

As Tracy Adler, the curator of Jeffrey Gibson’s This Is the Day exhibition at the Wellin Museum said to me, Gibson could go on continuing to make his famous heavy bag pieces for the next umpteen years and his admirers would still value his practice. But clearly, Gibson wouldn’t be satisfied with becoming an artist who behaves like a glib mini-factory producing pleasing objects. His show at the Wellin showcases his breadth and depth of making, with larger-than-life-size sewn tunics (decorated with what he likes to call “powwow regalia”), extravagantly decorated masks, ceramic pots, paintings made of exquisitely patterned thread, capes, tapestries, and figures — even a short video. This is the Day feels like a very big and searching exhibition, as it is genuinely an exploration of ethnic heritage and all the ways it might be refracted by personal experience. —Seph Rodney

The SITElines biennial at SITE Santa Fe has existed since 1995, but this year it enjoyed an expanded building and impressive guest curators José Luis Blondet, Candice Hopkins, Ruba Katrib, and advisor Naomi Beckwith. Titled Casa tomada, after the 1946 book in which owners are forced from their home by an unseen entity, the biennial offers pivoting but coherent expressions of displacement. The highlights included Curtis Talwst Santiago’s Infinity Series (2008–ongoing) displayed in a glass house, and Naufus Ramírez-Figueroa’s commissioned “Revindication of Tangible Property” (2018). Despite an expansive theme prescribed to 23 artists from eight countries, SITElines challenged all expectations, proving biennials can be high stakes when innovatively curated. —Kealey Boyd 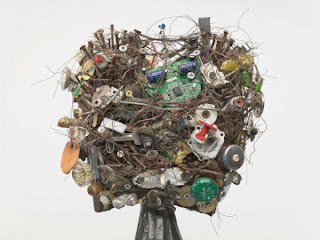 Compared to his monumental, mosaic-inspired abstract paintings, Jack Whitten’s carved wooden assemblages are intimate, raw, and intuitive — but no less powerful. This ground-breaking exhibition, curated by Katy Siegel and Kelly Baum, presented decades of never-seen-before sculptural works created in his summer studio in Crete, full of totems, guardian figures, icons, and memorial reliquaries made from carved wood, marble, stone, acrylic, fish bones, plastic credit cards, photos, handwritten letters, and random scraps. Whitten’s sculptures are deliciously rebellious and fiercely lyrical, bursting with personal narrative, as well as African, Classical, and literary allusions, though their impact upon his accumulative, jazz-inspired paintings is clearer in the show’s second iteration at The Met Breuer, where 3D works and paintings hang side-by-side to emphasize their parallels. At the BMA, however, they were relegated to separate galleries, which emphasized their obvious disparities. —Cara Ober

5. Ebony G. Patterson: Of 72 at Institute for the Humanities Gallery at the University of Michigan 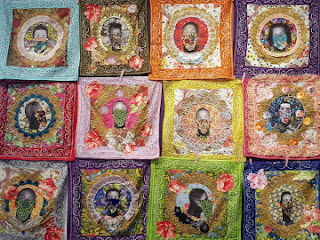 With her mixed-media installation, Of 72, artist Ebony G. Patterson asks a very straightforward question: “What happens when seventy-two men and one woman dies and no one knows who they are?” Patterson, a native Jamaican, is raising this question in connection to the 2010 armed conflict between the Shower Posse drug cartel and Jamaica’s military and police, which resulted in the killing of at least 73 civilians. The installation, curated by Amanda Krugliak, is comprised of mixed-media work on fabric with digital imagery, embroidery, rhinestones, trimmings, bandanas, and floral appliqués. The exhibition does not really answer these questions in a literal sense, but presents photographs, digitally printed onto fabric and each mounted onto a rainbow of ornately decorated bandanas, to represent the known victims of the Tivoli Incursion. The scene is wildly colorful, achingly detailed, and beautiful. When Patterson learned that 72 men and one woman died and no one knew who they were, she made a tribute that sings in their memory. —Sarah Rose Sharp…………………..