THE US FEDERAL GOVERNMENT HAS SHUT DOWN FOR THE THIRD TIME IN A YEAR, SO WHAT HAPPENS NEXT?

Federal US Government employees will be sent home or obligated to work without pay as Congress refused to meet President Donald Trump's demands for $US5 billion ($7.1 billion) to start erecting a border wall with Mexico.
While previous shutdowns have demonstrated that employees do eventually get paid retrospectively, this will mean a raft of employees will not receive a pay packet over the costly Christmas period.
Social Security checks will still go out. Troops will remain at their posts. Doctors and hospitals will get their Medicare and Medicaid reimbursements. 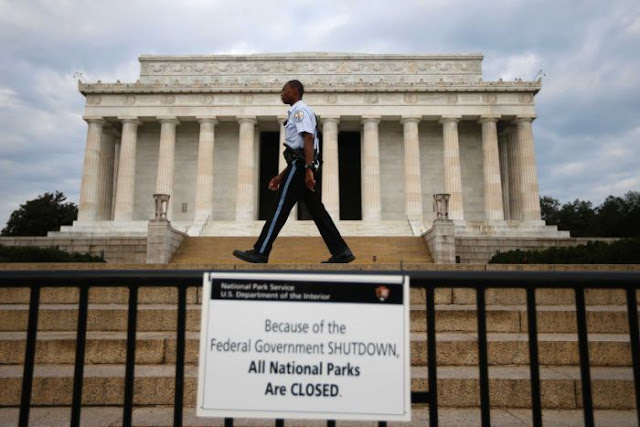 The US Postal Service, busy delivering packages for the holiday season, is an independent agency and won't be affected.

In fact, virtually every essential government agency, like the FBI, the Border Patrol and the Coast Guard, will remain open.

The Federal Emergency Management Agency can continue to respond to disasters.
Nearly all of the Department of Homeland Security's 240,000 employees will be at work because they're considered essential.

The Special Counsel's Office, which is investigating potential ties between the Trump campaign and Russia, will not be affected by a shutdown.

But hundreds of thousands of federal workers will be forced off the job, and some services will go dark. Even after funding is restored, the political repercussions could be enduring.

The Washington Monument and many other iconic park service attractions would close, as would museums along the National Mall.

In the past, the vast majority of national parks were closed to visitors and campers, but during the last government shutdown in January the Interior Department tried to make parks as accessible as possible despite bare-bones staffing levels.

It is not clear if that effort will be repeated, and a spokesperson for the Interior Department has not answered questions about the agency's overall plans for a shutdown.

Leadership at the agency is in flux, with Interior Secretary Ryan Zinke resigning effective January 2 in the face of ethics investigations………