Renzo Piano’s new design for the Genoa bridge, after the old bridge collapsed and killed 43 people. “It will be a beautiful bridge,” said Piano. “A very Genoese bridge. Simple but not trivial. A steel bridge, safe and durable. Because bridges do not have to collapse.” (via Dezeen) 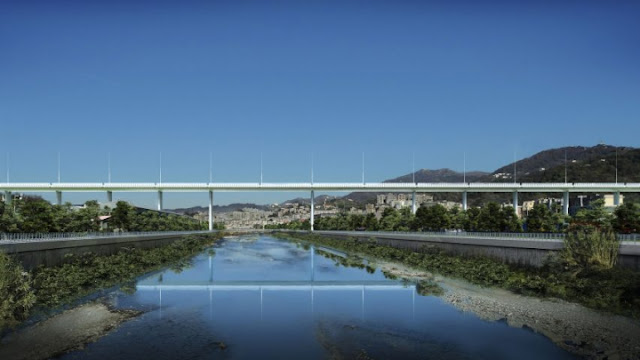 In Los Angeles, almost twice as many women as men had solo shows at Los Angeles’s major art museums. Christopher Knight at the Los Angeles Times does the math:
Add in smaller installations and project shows, bringing the total to 41 women artists’ presentations, and 2018 is a year when the city’s art museums reached gender parity in solo exhibitions overall.
Banksy left a sinister holiday message on a brick wall in the South Wales town of Port Talbot. At first the image appears to be of a boy reveling in snow, until you realize the snowflakes are in fact ash. According to Colossal, Port Talbot “drew attention earlier this year when a World Health Organization report named it the most polluted community in the UK (the designation was later revoked).”
Fifty years ago, a Caravaggio was stolen from a church in Palermo in the middle of the night. The painting has not been found since, though there have been strong speculations that the Sicilian mafia was involved — and there have been further leads as recently as this year. The Guardian digs into this curious story:
In the 30 years of its disarray, one witness after another has mentioned the magic name Caravaggio. It’s a charm with which pentiti are guaranteed to get judges, politicians and the media to prick up their ears. Stolen works of art, says Hill, are “talismanic” for gangsters. The name Caravaggio has become a kind of touchstone for repentant mafiosi.
About 20 million books are checked out from the New York Public Library every year. Here are the most popular titles of 2018. Jennifer Eagan’s Manhattan Beach topped all and, in the Bronx, the second most checked out book was Kaplan’s Test Assessing Secondary Completion.
An impeccably preserved, 4,400-year-old tomb of a priest and his family was discovered in Egypt. The photos in the New York Times report are gorgeous. Iliana Magra writes:

Nearly nine feet tall and 32 feet wide, the tomb has been under excavation since November. The walls are decorated with colorful hieroglyphs and statues of pharaohs, while sculptures of the buried priest and his family were placed in the tomb.

The Ivory Bill prohibiting dealing in ivory passed in the UK and will go into effect in late 2019. Gov.UK says that the “number of elephants has declined by almost a third in the last decade.” Here are some of the things the bill will enforce:

Introduce a total ban on dealing in items containing elephant ivory, regardless of their age, within the UK, as well as export from or import to the UK.

Establish a new compliance system to allow owners to continue to trade in exempt items.

Introduce tough new penalties for those found guilty of breaching the ban, including fines and possible imprisonment.

Google Arts & Culture launched an impressive digital recreation of Brazil’s National Museum, which was destroyed in a fire in September. Quartz writes:

The collaboration predates the tragedy. Google had begun working with the museum in 2016 to create the digital experience, using a combination of “high-resolution photography, photogrammetry, 3D laser scanning, and virtual and augmented reality,” writes program manager Chance Coughenour in a recent blog post. “Even though images cannot replace what has been lost, they offer us a way to remember.”