In Art and China after 1989, now at SFMOMA, China’s emergence onto the world stage is eclipsed by persisting Orientalist ideas and Western modes of curation. 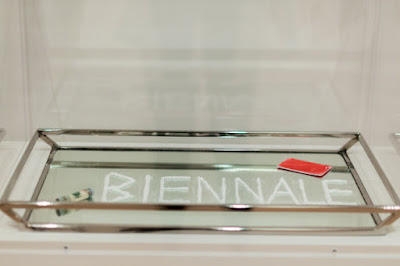 SAN FRANCISCO — One year after seeing Art and China after 1989: Theater of the World at the Solomon R. Guggenheim Museum in December 2017, I am still grappling with not only the presented artworks, but also the show’s reception. Now on view at the San Francisco Museum of Modern Art (SFMOMA), Art and China after 1989 continues to raise questions about how the predominantly white art world and white America view Chinese art and, by extension, China and Chinese people.

Although visitors of American and European museums have typically encountered Chinese art within the confines of the Arts of Asia galleries, rarely are they faced with contemporary Chinese art. Instead, they are greeted by jades, porcelains, scrolls, and religious icons created by Ancient and Imperial China that were plundered by Western powers during 19th- and 20th-century imperialist invasions, such as the Opium Wars. During this age of imperialism, museum curation of China served preexisting misconceptions of the country as primitive, inferior, and “Other.” And this museum framework persists. Throughout North America and Europe, traditional museum collections of Chinese art have solidified China in the Western collective memory as an exotic, culturally stagnant, and mystical foil to Western modernism. Art and China after 1989 provides temporary solace from this narrative by depicting China as contemporary and dynamic in the Western art discourse.

After decades of isolationism, Chinese artists working between the 1989 Tiananmen Square massacre and the 2008 Beijing Olympics consider the implications of participating in the international art scene. Yan Lei’s “Appetizer” (2002/2018) offers a glass tray with a rolled-up $100 bill and the word “BIENNALE” spelled out in white powder, standing in for cocaine. Yan recognizes that invitations to major international art exhibitions, such as the Venice Biennale, function as stamps of Western approval and recognition, and warns non-Western artists that this addictive form of acceptance distorts the value of their work by upholding a hierarchy that disproportionately values Western aesthetics. In the updated version of “Appetizer,” a SFMOMA security card replaces a credit card, transforming the work into a direct critique of elitist art spaces, specifically the very institution currently housing the artwork……….. 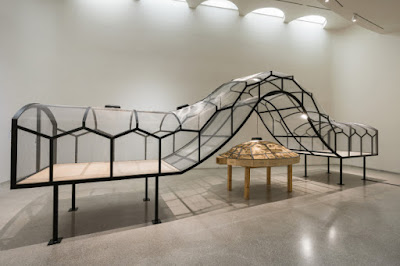 In an encounter between East and West, Xu’s video shows a pig stamped with incoherent letters from the Roman alphabet repeatedly mounting a pig stamped with the artist’s reinterpretation of Chinese characters. The performance, represented at SFMOMA as a blank video screen, serves as a tongue-in-cheek critique of Western imperialism and, as the accompanying object label puts it, “Chinese artists’ desire for enlightenment through Western cultural ‘transference.’”
In Sun and Peng’s video, frozen on the title screen at SFMOMA, four pairs of American pit bull terriers are placed on unstable ground, causing them to instinctually panic and run. Enhanced by the sounds of rotating treadmill chains and paws on wood, the synchronized performance culminates into a scene where the dogs appear to be running to attack each other. The video explores how visual and audio cues (of dogs running) can be manipulated to mislead viewers (into perceiving the scene as forced dog fights).

Rather than engage with the content of these works, critics have dismissed the pieces by measuring the non-Western works against Western art moments and values. While art historians, such as Sarah Cohen, label the pieces as “bad art” for involving animals, other writers scoff at Chinese artists engaging in a “tired, spent, exhausted cliché” that modernists in the West have used long before. By conflating contemporary Chinese artists and their treatment of animals with the practices of American and European modern artists, critics impose a Eurocentric analysis that fails to account for differences in experience with surveillance, censorship, and military violence. Ironically, when writers call for the artists to be placed in the animals’ positions, they forget that all four works depict China’s oppression following brutal conditions — the Tiananmen Square massacre.

False equivalences between these fours works in Art and China after 1989 and Dana Schutz’s “Open Casket” (2016) or Sam Durant’s “Scaffold” (2012) demonstrate art criticism’s focus on freedom of speech that feigns color blindness. The latter two works involved white artists capitalizing on Black and Indigenous trauma, respectively, and their corresponding communities protesting the white gaze. In contrast, Art and China after 1989 features works created by Chinese artists that received backlash from a specific form of white neoliberalism that repeatedly prioritizes animals over people of color, from the hypocritical moral grandstanding against the yearly Lychee and Dog Meat Festival in Yulin, China, to, most recently, PETA’s equating of “anti-animal” language to racist and homophobic hate speech. Grouping together the Schutz, Durant, and Art and China after 1989 artworks as issues of free speech — as writers at CNN and the New York Times have done — glosses over the unequal racial power dynamics at play.