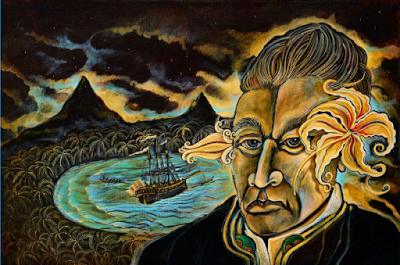 250 years ago James Cook left England on the first of three expeditions to the Pacific Ocean. A skilful navigator, he visited many places new to Europeans and his voyage accounts were widely read and celebrated. Today, his legacy is sometimes debated. In the Pacific, Islanders continue to remember the encounters that occurred, reimagining them in artworks which reflect on their impact.
This exhibition explores these Pacific perspectives and displays the work of contemporary Pacific artists, alongside objects collected on the voyages themselves. Michel Tuffery’s powerful painting Cookie in the Cook Islands, imagines how Cook might have been transformed by his Pacific experiences. Lisa Reihana’s Taking Possession, Lono, shows Captain Cook and his men about to hoist the British flag on a Polynesian island, raising questions about what each group might have understood by the idea of ‘taking possession’. An imposing Tahitian costume worn at ceremonies to mark the death of a chief, is on display for the first time in many decades. Collected on Cook’s second voyage and one of only a handful still in existence, it has been extensively conserved.
As commemorations abound on this major anniversary, this exhibition considers some of the complexities of Cook’s legacy in the Pacific, from New Zealand to Vanuatu and from Australia to the islands of Hawaii.