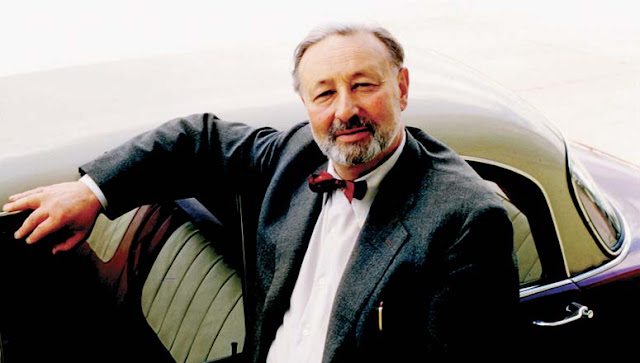 Lane Motor Museum is proud to tell an oft-hidden chapter in the tumultuous and sometimes unpleasant creation story of one of the world’s most popular cars, the Volkswagen Beetle.

In the decade leading up to World War II, the German automotive industry was in decline. Several industry analysts had suggested that manufacturers shift production from large, luxurious cars for the wealthy and instead create an affordable volkswagen, a common German term for “people’s car.” One such voice was that of Josef Ganz, a Jewish engineer and editor of a German automotive magazine. Ganz advocated endlessly for the development of a lightweight, inexpensive car, streamlined for aerodynamics, independently suspended at all four wheels with swing axles in the rear, and powered by a rear-mounted, horizontal engine. Ganz even developed a prototype, which led to a production model, the Standard Superior, in 1933. This car was displayed at the 1933 IAA (Internationale Automobil-Ausstellung, the Berlin Auto Show). Also attending the show was the newly appointed Chancellor of Germany, Adolph Hitler, who was eager to develop a people’s car of his own.

During this time, the political climate in Germany was one of turbulence. With the rise of the Nazi party, anti-Semitism began to run rampant. In 1934, the same year Hitler gained ultimate power, Ganz was arrested by the Gestapo on false charges of blackmail of the German auto industry. Soon after, Hitler commissioned one of Ganz’s contemporaries, Dr. Ferdinand Porsche, to begin work on the car that would become the Volkswagen Type 1.

While there were many concepts for a people’s car that were submitted from many designers, Josef Ganz’s name was ostensibly removed from the Beetle’s creation story due to his Jewish heritage. Ultimately Ganz left Germany for Switzerland, and later died in obscurity in Australia in 1967.

The story of Josef Ganz reflects one of the many atrocities of persecution that befell victims of the fascist Nazi regime. The four vehicles in this mini-exhibit either influenced Ganz, or they were influenced by him.

The “Josef Ganz Story” mini-exhibit at Lane Motor Museum is part of a programming partnership with the Nashville Symphony and the Violins of Hope project. The Violins of Hope are a collection of restored instruments played by Jewish musicians during The Holocaust. These instruments have survived concentration camps, pogroms and many long journeys to tell remarkable stories of injustice, suffering, resilience and survival. The Nashville Symphony is bringing the Violins of Hope to Nashville to facilitate a citywide dialogue about music, art, social justice and free expression. Lane Motor Museum is honored to be a part of this community-wide project. Learn more at http://www.violinsofhopenashville.com/