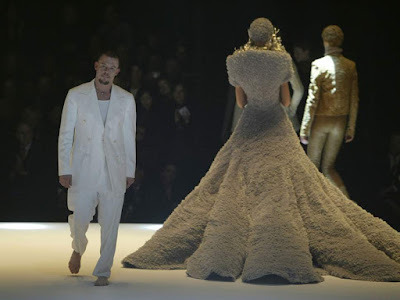 A callousness to Thomas's tales: Alexander McQueen on the catwalk in Paris, March 2004 ( Reuters )

On 12 January, the designer John Galliano – a former head of Christian Dior who was dismissed after a drunken anti-Semitic rant in a Paris bar in 2011 – showed his first collection for the label, Maison Margiela. Almost a month to the day, 11 February marks the fifth anniversary of the death of Lee Alexander McQueen, who died by his own hand.
How best to commemorate these events – marking the passing of one British fashion star and the restoration of another to the industry following an intense period of remorse and rehabilitation? By the publication of a glossy, gossipy tell-all biography running their two stories side by side. Tasteless? Definitely. Lucrative? Probably.
Dana Thomas, an American fashion journalist based in Paris, seems to have no qualms about the former, presumably in search of the latter. She publishes her latest work, luridly labelled God and Kings: The Rise and Fall of Alexander McQueen and John Galliano, to neatly coincide with not only the anniversary of McQueen's suicide, but also the launch of the Victoria and Albert Museum's exhibition, Savage Beauty, a British incarnation of the blockbuster show originally staged at the Metropolitan Museum of Art in New York. That exhibition was the most successful of the museum's annual Costume Institute shows (some 650,000 people passed through its doors), becoming one of the eight most-visited exhibits ever in the august institution's 145-year history. The V&A has already experienced record-breaking advance ticket sales: over 30,000 have already shifted. The number is only set to rise.
What does that indicate? An enthusiasm for McQueen's clothes, certainly – motivated by a number of factors. Not least of which is a morbid fascination with the recently departed. As for Galliano? His spectacular fall from grace has proved tabloid front-page fodder over the past four years. His rehabilitation and return to the fashion fold has been dissected by broadsheets and red-tops, outside the usual limits of said publications' fashion pages. Why not capitalise on the curiosity surrounding both, and spuriously compare the two? I say spurious because, despite both coming from working-class London backgrounds and being educated at Central Saint Martins, there is little to connect the work of Galliano and McQueen. Galliano was raised in Gibraltar before his parents moved to London, McQueen born and bred in the city's East End. Galliano graduated in 1984, McQueen 1992. And while the theatricality of their visions may seem to share a common thread of inspiration, Galliano was consistently more romantic and sensual, McQueen savage and macabre.
All that, of course, is incidental. The important part isn't drawing illuminating connections between McQueen and Galliano's life and work, the parallels in their rise to the top of the fashion game without high-born advantages. Rather, Thomas's book is about the salacious Schadenfreude she and her readers can enjoy at their mutual downfall. I feel there is a callousness to Thomas's telling of the tales of these two designers, unpicking their shortcomings, their personal demons, their failures, and exposing the unravelling seams of their lives and work for all to see. Galliano, she tells us, was a man whose best work was behind him by 1994 – almost 20 years before his downfall. McQueen was his technical superior, but a man enslaved by his carnal needs. She gleefully recalls an assistant being advised that her job would involve washing McQueen's sex toys – the Marquis de Sade meeting the surreal entitlement of the fashion world as depicted in The Devil Wears Prada.

That book was a bitchy, brittle and thinly veiled roman à clef. Thomas's characters in Gods and Kings are real, but there's the same feeling. She seems determined to undermine not only the legacy of McQueen and Galliano, but the entire fashion world, to prick its entitled, elitist bubble and expose that it's nothing but hot air. Despite the fact that, as her website declares, Thomas has worked in fashion for over 20 years, beginning her career on the style section of The Washington Post and working as a cultural and fashion correspondent for Newsweek in Paris from 1995 to 2011, she seems to have no affection or affinity for the industry. Her last book, Deluxe: How Luxury Lost Its Lustre (2007), ripped open the world of hyper-luxe handbag manufacturing, exposing the conspiracy of high-fashion conglomerates keeping prices soaring ever-higher whilst cutting on manufacturing costs. Deluxe was pithy and pitch-perfect, the perfect debunking of the contemporary fashion myth. Thomas crowned the French fashion house Hermès – whose made-to-order handbags retail for upwards of £5,000 – as the embodiment of true luxury. Her disdain for Louis Vuitton (whose parent company, LVMH, own both the house of Christian Dior and 91 per cent of the John Galliano label) is absolute.
I am a fan of Deluxe, of Thomas taking the faceless conglomerates to task for their commodification of luxury. It won't make any difference to their sales figures – neither did a 2010 ruling by the UK's Advertising Standards Authority that two of the brand's print adverts, depicting artisans hand-sewing Vuitton handbags, were "misleading": "Consumers would interpret the image of a woman using a needle and thread... to mean that Louis Vuitton bags were hand-stitched."

But I am not a fan of Gods and Kings. I doubt many in the fashion industry will be. Not because the line between biography and hagiography is especially blurred when it comes to fashion (although that is undoubtedly true) but because the fashion industry interacts with John Galliano and Alexander McQueen as three-dimensional people, not two dimensional labels. Thomas does, too.

Gods and Kings is one of those odd books that makes you wonder why the author wrote it, so obviously does she loathe her subject matter. You also wonder what she said to urge McQueen and, to a lesser extent, Galliano's confidants, to share their secrets and rip apart their legacies. There is a vengeful, spiteful tone to this book, redolent of the unpleasant sniping and gossiping that is, alas, endemic in the fashion industry. Thomas closes with a chapter plucking at the heartstrings and bemoaning the demise of true creativity in fashion. "There is no poetry," she muses. "No heart. No angst. It's just business." Maybe that's how she justifies this sullying, sneering, muck-smearing book to herself, alone, late at night. I hurled this book away from me. I urge you to do the same.